Pancotto literally translated means bread cooked, now in my book that kind of translates as toast, of the butter and marmalade kind, so lets use the accepted translation of bread soup.

Well, I thought it was pancotto or bread soup until Vincenzo arrived home and peered in the pan, ‘l’acquacotta‘ he declared (‘cooked water.’) I was momentarily confused, was he referring to the soup, was it disapproval, was the reference to cooked water akin to that of ‘acquasporca‘ (dirty water) something he hisses at bad coffee. He scooped out a large spoonful and smiled in quiet approval, the way he often does when faced with his idea of a divine trio, bread, oil and tomatoes. His face revealed it wasn’t a criticism. I was confused none the less, ‘cooked water.’

A long discussion ensued, the kind Italians excel at, about the correct name for the contents of the pan, a rather comforting mushy looking concoction of oil, onion, garlic, tomatoes, bread and water. Was it pancotto or acquacotto or to confuse things further was it in fact pappa al pomodoro. I showed him the recipe I had followed from il cucchiaio d’argento and pointed firmly at the printed title. Loving the opportunity to be contrary, he simply shrugged his shoulders, insisted it was aqcuacotto and pointed firmly to the title of recipe 1095 in the heavyweight volume Le ricette regionale d’italia. Many volumes and much pointing later we concluded it could well be any of the three and decided supper was long overdue.

This is the kind of dish which helps me better understand the brilliance of simple Italian cooking, the most startlingly economic, basic ingredients united to create humbly, delicious cooking alchemy. This is ingenious and thrifty (using up old bread) cooking. 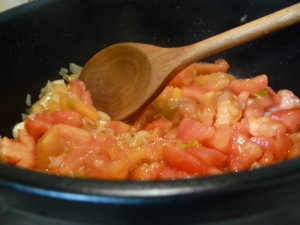 An onion and clove of garlic are sauteed in some oil, some chopped tomatoes are added and left to bubble and plop plop away gently for a few minutes. Bread is added (thats where the pancotto bit comes in) then fresh water (and, bing, that will be the acquacotta) the pot is left again to simmer and soup thicken before allowing it to rest. The soup is finally enriched with plenty of freshly grated Parmesan and a dribble of raw oil.

Nothing fancy you see, the ingredients, and there aren’t alot of them (like so much good Italian food), are no frills, in fact, lets face it they are downright basic, so they need to be pretty top notch. I generally use San marzano or Roma tomatoes.

This is what I call comfort food, this is the kind of bowlful that’s its right up there with mashed potato topped with a fried egg, chicken soup or a soft boiled egg with marmite soldiers, but comfort food I would be proud to serve to anyone.

So whatever you feel inclined to call it, this the recipe I followed, it is adapted from il cucchiaio d’argento.

Tuscan unsalted bread is superlative for this recipe as is Altamura.

Plenty of freshly grated parmesan and good oil to sprinkle and dribble.

Add the prepared tomatoes to the pan, stir well and leave over the gentle flame to bubble away for another 10 minutes.

Pour in the 250ml of boiling water add the bread, stir carefully but firmly.

Add the litre of water, stir again, season with salt and freshly ground pepper. Turn up the flame slightly and allow the soup to come to a gentle but lively simmer. Allow the soup to simmer for another 10 minutes or until it is fairly thick.

Remove from the heat and allow the soup to sit for at least 10 minutes so the flavours can settle and mingle – the soup is at its best when it has cooled a little.

Ladle into bowls and serve, allowing everyone to sprinkle over the parmesan and dribble the oil as they so wish.

5 responses to “Pancotto or bread soup”