In praise of salt cod

I didn’t really know anything about salt cod, apart from the obvious cod-that- is-preserved-in-salt, until I moved to Italy, which is five years ago now, time it seems does fly.

I had seen salt cod in London, stiff, salt crusted, mysterious and rather foreign behind the glass counters of Portuguese, Spanish and Italian delicatessens, and our local Jamaican minimarket in Hackney – known affectionately as the bong – often had a heap of ‘saltfish’. But I have to admit I screwed my face up, declared it peculiar, quite ugly, odd smelling and then thought no more about it.

I must have been in Rome about a year when it finally dawned on me; the Baccalà al’ agro dolce I’d eaten and loved in our local trattoria (Bucatino in Via luca della Robbia, a rowdy, boisterously good, no-nonsense Roman eatery thats worth making a note of for your next trip to Rome); the sublime filetti di baccalà, plump fish fillets, battered and deep fried from the venerable fry shop of the same name just off Campo de ‘Fiori (another note worthy address); the curious white fillets of baccalà desalinating in the vast water-filled tubs standing brim full outside shops and market stalls; the scent of baccalà that curled up the communal staircase on Fridays, the traditional day to eat fish in Rome, they were all salt cod. Baccalà was not – as I first thought – simply cod, it was salt cod. The curious and delicious fish I’d fallen in love with in Rome was the mysterious and peculiar specimen I had turned my nose up at for all those years.

For those of you who don’t know, salt cod – the Italian Baccalà,  Spanish bacalao, Portuguese bacalhau and French morue – is fresh codfish which has been split lengthways, heavily salted and then partially dried to preserve it. The best salt cod comes from the Lofoten Isles in Norway where a whole industry and way of life has grown up around the fishing, salting and drying of cod. Salt cod has a long and complicated history, it dates back to medieval times and the earliest methods of preserving food under salt. To really understand the deep significance of salt cod would be to really understand the history of codfish, of salt, of international trade and politics; the history and power of the Roman catholic church and it’s days of abstinence; the discovery, exploration and exploitation of the new world; the dark story of slavery and colonisation. Mark Kurlansky tells this story beautifully in his book Cod: A biography of the fish that changed the world.

Back in Rome, having discovered that I didn’t just like but adored salt cod, I began buying it. Vincenzo was most supportive of my experimentation ‘va benissimo‘ he said ‘è la mia pesce preferita (favourite fish)‘ and did that rather quaint Italian gesture of food approval, the one where you put your index finger to your cheek and twist.

Now, if the first hurdle with salt cod is it’s odd appearance and particular smell, the second hurdle is the soaking, ah yes, the soaking. Salt cod can only be used after having been soaked in frequent changes of fresh water for at least 18 hours in order to soften the flesh and remove the salt, umm, roll eyes. And there’s more, a third hurdle, mastering the soaking, it takes practice, too short and the salt cod is tough as old boots and very salty, too long and it’s tasteless and wooly, rather like a wet jumper. Are you still with me? This process and practice puts salt cod firmly in the slow food category, but that’s a good thing isn’t it ? Aren’t we all trying to embrace more slow food ?  Yes, soaking is a bit of a fuss, especially the first time, but then you discover the intriguingly delicious nature of salt cod and the mild palava of soaking feels utterly worthwhile.

Salt cod has many of the characteristics of fresh cod, large, soft flakes of succulent, opaque flesh which like all good fish, reeks of the sea. It also has other qualities, an extraordinary texture from the salting, the flesh is firmer and has slightly chewy, toothsome quality, soaked properly salt cod is beautifully seasoned with a pleasingly pungent taste.

The Italians, like the Portuguese and the Spanish are passionate enthusiasts of salt cod and have evolved marvelous ways to cook it. Baccalà al’agro dolce is salt cod, bright with tomatoes, cooked in wine and vinegar moderated with sugar and flavoured with red pepper, pine nuts and sultana’s; Baccalà alla pizzaiola from Naples is salt cod covered with tomatoes, breadcrumbs, capers, plenty of oregano and baked in the oven; the delicious Baccalà all vientina, salt cod on a bed of onions slowly softened in olive oil, covered with milk and then baked in a very low oven for about two hours; Filetti di baccalà, which I have already mentioned, plump pieces of salt cod, dipped in batter, fried until crusty-coated outside and succulent within.

There are dozens of salt cod recipes I would like to tell you about – many of them come from Vincenzo’s Mum Carmela who is a quiet master of soaking and cooking baccalà – but I fear this post is starting to feel as long as the soaking required for a big fat piece of salt cod. Therefore, I have chosen just one, my favourite. Its not just my favourite recipe for baccalà, it’s an all time favourite recipe and one of my preferred things to eat, brandade di morue. 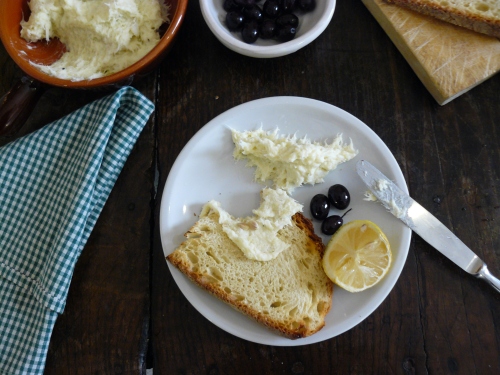 Brandade di morue is a heavenly invention, a creamy white purèe of salt cod, potato, olive oil and milk flavoured with lemon juice and garlic. It’s a speciality of the city of Nimes in the Languedoc province of France called but the origins of this recipe are probably Italian as it is very similar to the Venetian baccalà mantecata as described by the wonderful Gillian Riley.

‘Soaked baccalà is pounded with a little garlic and olive oil in a pestle and mortar to make a smooth thick paste; this is transferred to a pot and beaten with a wooden spoon, gradually adding a light olive oil drop by drop until the fish has taken up what it can handle, which can sometimes be diluted in the process with warm milk, to make a light and pungent cream’ 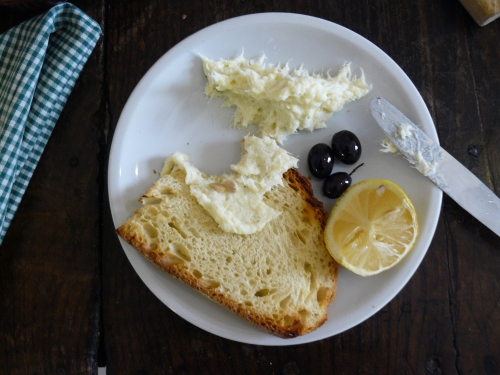 This is one of our favourite suppers, we open a bottle of Pieropan Soave, tip some black olives in a bowl, make a big pile of toast or fry little triangles of bread in olive oil, then we sit scooping up the warm, creamy pureè and telling each other how much we like brandade.

Salt cod can seem difficult to find, have patience, it is probably hiding behind the counter at your local Portuguese, Spanish or Italian delicatessen. Look for a nice piece of cod from a center cut where the fish is thickest and at its most succulent.

I’ve got into the habit, as is so often the case, of following Simon Hopkinson’s recipe for brandade di morue because it works so beautifully.

Adapted from Simon Hopkinson’s Roast chicken and other stories

Boil the potato in salted water until cooked, drain ( I put the potato back in the empty pan and back on a low flame for a few seconds so the water still clinging to the potato evaporates.) mash, rice or mouli the potato while it is still hot and then keep it warm.

Put the milk and crushed garlic in small pan over a low flame and very gently heat until only just warm but not hot.

Heat the olive oil gently in a small pan, it must remain tepid or the oil will disintegrate and ruin the whole preparation

Put the cod in a saucepan of cold water, bring to the boil, then switch of the heat. leave for 5 minutes, then using a slotted spoon remove the cod to a plate. Take off the skin and pick out any bones, flake the fish and then put it in a food processor.

With the motor running, alternately add the olive oil and the garlicky milk until you have a thick a thick, gloopy paste the consistency of thick cream. This can be done by hand, crushing the fish with the back of a wooden spoon and then adding the oil and milk very gradually and alternately and stirring vigorously with great patience and considerable energy.

Turn the mixture into a bowl and then beat in the mashed potato using a wooden spoon, not too much or the mixture will go Gluey. Stir in the lemon juice and black pepper, taste, add salt if necessary.

Transfer to a serving dish or shallow bowl and then serve with black olives, plenty of toasted country bread (or triangles of bread fried in olive oil) and wedges of lemon. 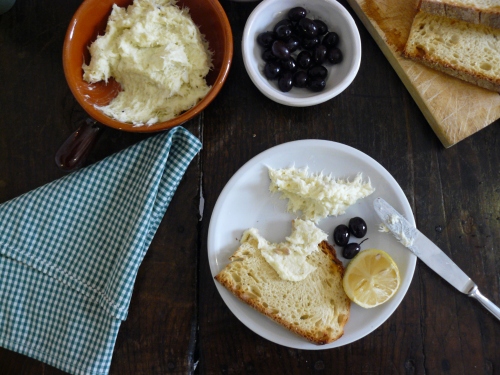 23 responses to “In praise of salt cod”