And on the third day I ate ricotta di pecora. At least I think it was the third day! I can confirm this when I collect my diary and moleskin from Vincenzo’s flat. The accordian-like moleskin containing the unruly horde of tickets, receipts and other keepsakes from those first weeks in Naples and Sicily. I ate my soft, ephemeral slice of pure-white sheep’s milk ricotta with bread sitting on the grubby steps of a fountain near Quattro canti in Palermo. It was, like me, a messy affair. The ricotta, just hours young and wrapped in waxed-paper rather like the wedge of ricotta romana above, was extremely soft and sitting in a puddle of whey. Speed, slurping and strategic bread sopping were no match for the ricotta, a large proportion of which ended up down my t-shirt and on my Jeans. A not insignificant occurrence for a someone travelling with only the clothes they stood up in.

I’d eaten ricotta many times before, but it had always been made from cows milk, inevitably undergone UHT treatment and restrained neatly in a squat tub. The slice on the fountain steps was another thing entirely: a quivering mass of lactic loveliness with an unmistakably sheepish nature. Made that morning, it seemed the epitome of purity and freshness. And so began my affair with ricotta di pecora. As is so often the case, those first weeks were intense and slightly compulsive. I ate slice after slice, usually with bread, possibly a tomato or maybe a few dark salty olives. If I’d remembered to swipe a couple of sachets from the bar I had breakfast in, I ate my white slice dribbled with runny honey. I pointed to pasta con la ricotta (pasta with ricotta and a fearless quantity of black pepper) whenever I spied it on the menu. I ate cannoli, cassata and cuccia.

What began in Sicily continued in Rome. Ricotta genuina romana made from sheep’s milk (pecora) is highly prized and every bit as delicious as it’s slightly soupier Sicilian cousin. I buy it by weight from Volpetti, watching through the glass counter as one of the white coated assistants – usually Roberto – cuts me a Testaccio shaped wedge from the white dome crosshatched with the marks of the plastic basket it was turned out from. I eat it squashed on toast topped with salt, black pepper and olive oil. I’ll have a spoonful or six for breakfast with honey and nuts. Ricotta di pecora makes a good addition to tomato sauce, a perfect layer in lasagna and a fine (if rather unnecessary) companion for Pomodoro col riso. Stirred with chopped spinach it produces (with a little practice) stupendous gnocchi. Then lately, inspired by Lucio Sforza, I’ve been mixing ricotta di pecora with lemon zest and parmesan.

Lucio Sforza is the chef and owner of possibly my favorite place to eat lunch in Rome these days: L’Asino d’Oro in Monti. He makes an amazingly good value set lunch ‘il Pranzetto‘ for those lucky enough to secure a reservation. For 12 euro’s you are brought a bottle of mineral water, a glass of wine and good bread before being presented with a small but perfectly formed taster, starter, first and second course. His food is loyal to his Umbrian Roots and the way he ate as a boy. It’s traditional but at the same time truly innovative (he used the word transformative when we talked and Luca crawled manically around the empty restaurant) and youthful. He’s a stickler for excellent ingredients, a firm believer that you can eat very well without spending a fortune and has a masterful touch when it comes to pork, game, mushrooms, lentils, pulses, wild herbs (particularly sage) and ricotta di pecora. 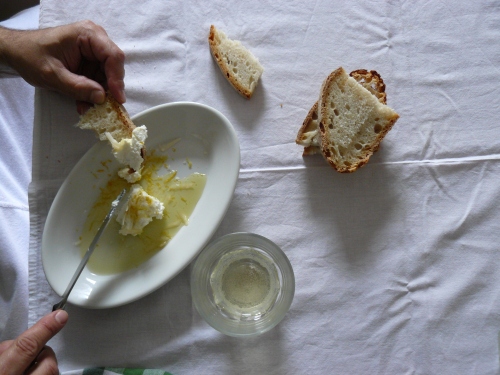 A few weeks ago the taster or assagio –  the amuse bouche if you will – was a little mound of ricotta di pecora speckled with lemon zest, grated parmesan and what I assume was Umbrian olive oil (green, light, full of flavor and highly scented.) It was barely more than a mouthful, three if you shared it between three nubs of bread. But what a mouthful.

I’ve been making it at home, mashing and creaming the ricotta di pecora with a fork or –  if I have time – pressing it through a sieve. I’ve been topping my mound of white cream as Lucio does, with a shower of grated lemon zest, some coarsely grated parmesan and a little extra virgin olive oil. I’ve been eating this extremely tasty taster with good bread, smearing it liberally on hot toast, nudging it onto boiled potatoes and then the other day having been given some particularly nice thick ribbons of pappardelle, I decided to try this lemon scented, parmesan spiked ricotta cream with pasta. 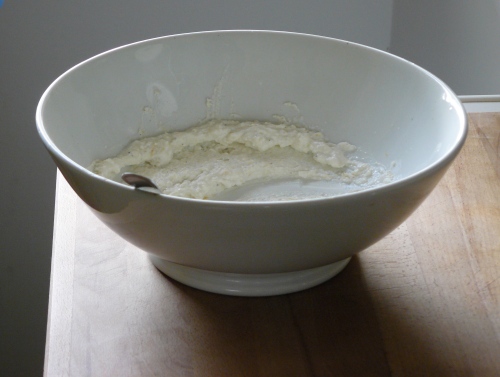 While a large pan of well salted water lumbered to the boil, I mashed and then beat 250 g of ricotta di pecora with the zest and a little of the juice of a large unwaxed lemon, a hefty handful of grated parmesan, a good pinch of salt and a grind of black pepper. Once the water was rolling like a stormy ocean, I slid the pappardelle into the pan and pushed it down with a wooden spoon.

When the pasta was nearly ready – and this is important –  I ladled a little of the pasta cooking water – cloudy with starch – from the pasta pan into the ricotta cream in order to loosen it a little. I also set another cupful aside in case further loosening was necessary. I drained the pasta before tipping it on top of the ricotta cream and tossing the wide ribbons in the thick white paste. The egg pappardelle was surprisingly absorbent and so a little more pasta water was needed! After all this is a dish that should be moist! The ribbons of pasta should slip and slide not clump and stick. I served my pasta with ricotta, lemon and parmesan cream with a little extra virgin olive oil poured over the top.

We both agreed it was lovely and Luca smeared enthusiastically. The ricotta di pecora provides a seductive creamy coat. The mood lifting citrus lends freshness and cuts through even the slightest suggestion that lunch might be cloying.  The pepper adds heat and the parmesan its soft, granular, savory umami. 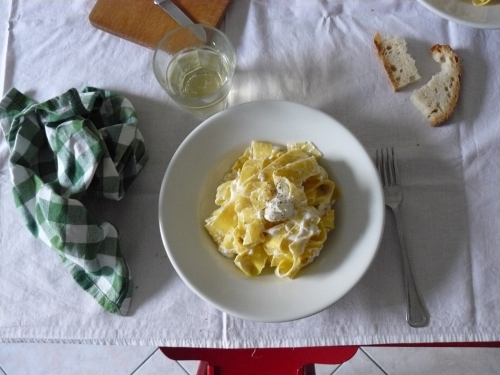 And for dessert – not the same day I hasten to add – a variation on our theme, a ricotta heavy, lemon scented, almond flecked, egg laced, rum spiked, oven baked Budino.

Now literally translated budino means pudding, so we could translate budino di ricotta as pudding of ricotta or, better still. ricotta pudding,  We could just as easily call it a ricotta cake, a baked cheese cake or a baked ricotta pudding.

The procedure is nice and straightforward. You sieve the ricotta and then beat it first with the egg yolks and then with the ground almonds or flour, sugar, lemon zest, salt and rum. Keep beating until you have a smooth, consistent cream that begs – for the raw egg fearless among us – to be tasted repeatedly. To finish you fold in the egg whites you’ve whisked so vigorously they’ve formed – giggle – stiff peaks and then scrape this thick batter into tin brushed with melted butter and dusted with fine breadcrumbs. You bake. The cake that is, until it’s firm, puffed with price and just a little golden on top.

Now if you are a fan of delicate puds and pretty cakes, this probably isn’t for you. If however you think you might like a dense (but not heavy), lemon scented, rum laced pudding that is all at once a rather sophisticated fat pancake, a fruitless bread and butter pudding, a baked custard and the inside of a Jewish baked cheesecake I suggest you try this recipe. I adore it. 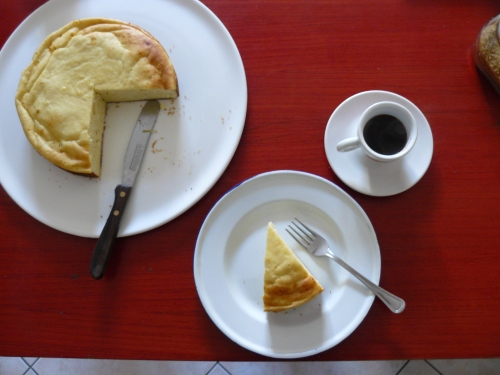 I probably should have noted that ricotta (which literally translated mean re-cooked) is a milk product, usually described as cheese, made by re-cooking the whey left over from cheese making. Now I have been rambling on about ricotta di pecora which is sheep’s milk ricotta, a glorious, ephemeral product, that is almost impossible to find if you are not In Italy. Of course you can use cow milk ricotta! Just look for the best quality available. When you come to visit – which you should – we will go ricotta di pecora hunting together.

Set the oven to 180°. Brush a 25cm / 10 inch cake tin with melted butter and then dust it with fine breadcrumbs.

Separate the eggs putting the whites in one large bowl and the yolks in another. Sieve or mash the ricotta and beat it together with the eggs yolks. Add the sugar, almonds/ flour, lemon zest, rum and salt and beat again

Whisk the eggs white vigorously until they are mounted and form soft peaks. Using a metal spoon gently fold the eggs whites into the ricotta mixture. Pour the thick batter into the buttered and crumbed tin. Bake for 40 minutes or until the cake is firm, puffy and slightly golden  on top.

Serve just warm, at room temperature or cold. You can dust it with icing sugar if you like. 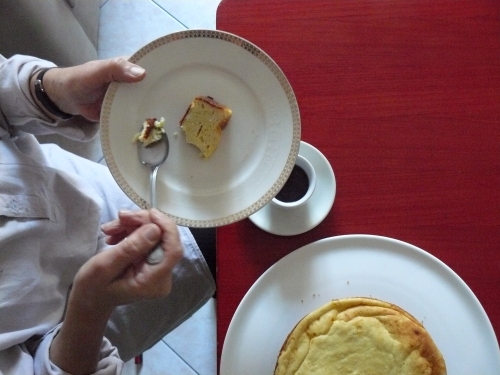 47 responses to “A bit sheepish”