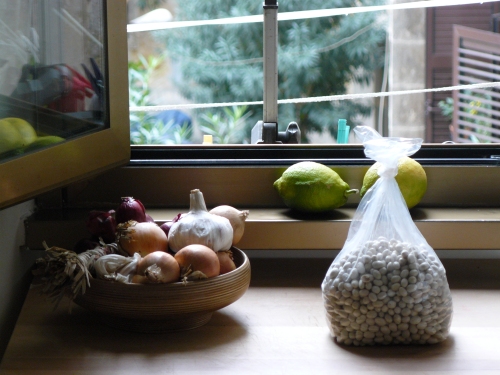 It is almost always the case that I’m wearing my dressing gown and one-armed – therefore lopsided – glasses when I put my beans to soak. This is because the beans are slumped next to the coffee, tea, neglected herbal bags (mango passionfruit and vanilla – as hideous as it sounds,) a very peculiar chicory drink I bought when I was pregnant and not thinking straight and the Green and Blacks hot chocolate in the kitchen cupboard. I’m probably slumped up against the kitchen counter in much the same way as my legumes are against the tin of Earl Grey tea when I catch sight of the beans. They stare back, both appealing and reproaching. ‘Two months woman, two months and without so much as a dusting!’ And so as the Moka rattles to its delicious climax and the milk warms in the pan, I tip my white, brown or mottled beans into my largest tin bowl and then cover them with water.

On Monday morning it was pearly white coco beans that skittled into the bowl. Coco beans bought from Giovanni and Assunta Bernabei’s Stall at Testaccio farmers market with Mona. The stall with the sign that reads ‘My name is Giovanni Bernabei.  Ever since 1983, I made a pact with myself to touch no longer with my hands any fodder, fertilizer or any chemical products whatsoever.  So long as I have the strength to raise a hoe, I will labor for those who believe in me and appreciate my produce.’ Needless to say, Giovanni is one of my food heroes.

On Monday afternoon I cooked the beans, letting them lumber to the boil and then shudder away burping every now and then for about 4o minutes until they were soft, tender and surrounded by an opaque pool of unassuming bean broth.

Unassuming but inimitable. This cloudy spoonful is the other reason I buy fresh beans or good dried ones and then soak and cook them myself. This cloudy, starchy, richly flavored liquid is the ingredient that makes bean soups, stews and dishes like pasta e fagioli taste so good. I learned the hard way. Vincenzo made a very odd noise and then buried his head in his hands for some time on observing me slosh the bean water down the plug-hole and then rinse the beans. I think he might have called me a barbarian. He shook his head repeatedly during lunch. I’ve never made the same mistake again.

I used a slotted spoon to remove the first meal’s worth of beans. They were still warm with just enough of the bean water clinging to them to keep them moist. Olive oil, crumbled salt and a twist of black pepper were all they needed. Beside my heap of soft white beans, I had seven black olives, half a small ball of mozzarella and three radishes.

Then yesterday – Tuesday – having been struck by an uncharacteristic but almost overwhelming desire for plump, pink sausages – I think one of my neighbours early morning cooking sessions might have curled up my noise and into my food consciousness or maybe it was just my hormones – I decided a thick bean braise, a bed of beans if you like for under my bangers was in order. 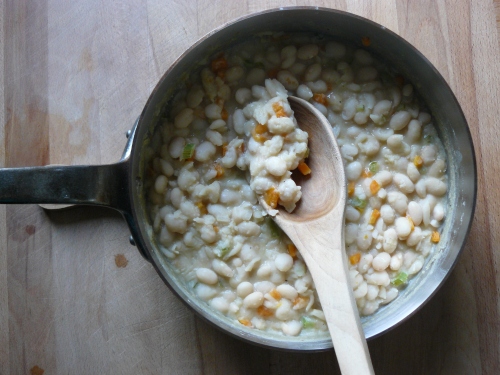 I took, as I often do, a well trodden path. Please forgive me if this blog is starting to feel a little a like a bean deja vu! I took an onion, a clove of garlic, a carrot and a stick of celery. I peeled, diced and then sautéed my harlequin heap in extra virgin olive oil until it was extremely tender, golden and – with much of the water sautéed away – intensely flavoured.  I added the beans and their precious broth, a generous pinch of salt and three twists of black pepper. I let the pan bubble and burp discretely for about 15 minutes.

The beans were ready long before my fat, cheeky-pink sausages from Sartor were. Fortunately for me, beans are forgiving things and perfect for someone with shoddy kitchen manners and awful timing. Both the beans and sautéed vegetable benefited no end – rather like me at about 3 0 clock – from a little rest. I cooked my sausages in the oven, pricking them with a fork first and then roasting them for about 40 minutes or so. 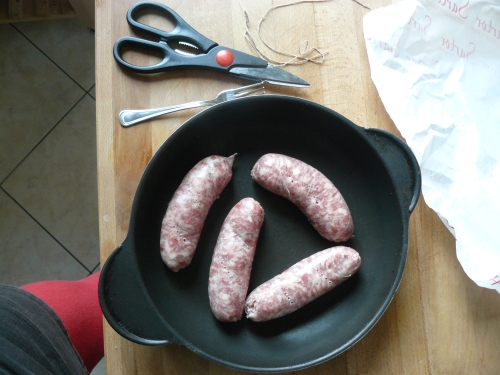 Once my sausages were burnished and smelling pretty irresistible, I pulled them from the oven. I gently warmed the beans, noting they needed another ladle of bean broth in order to achieve the right consistency. That is: thick enough to provide a comfortable bed, but still soft and very spoonable.

Warm bowl, a bed of beans and two fat sausages, Lunch. Now you may well note the absence of half a sausage on my plate. Three slices were eaten whilst plating up – yes I did work in the hospitality industry, 1988 – 90 at Harpenden Moat House: grim weddings, depressing family gatherings and budget Sunday roasts were a speciality – and yes I did burn my tongue.

Sausages and beans, how do I like thee? Let me count the ways. This is such a good plateful: the soft, nutty beans contrasting brilliantly with the fat pork sausages. Ben, Dan W, Harriet and C°, Dan Gunn in Berlin this is one for you.

The beans I used were this season’s, so only semi dried. I probably could have got away with not soaking them, However Assunta suggested I soaked them in cold water, drained them and then simmered them gently for just 40 minutes. Older, drier beans might have needed and longer soak and boil. As beans vary so dramatically, it’s difficult to give definitive advice! I suggest some experimentation, after all, the quest for good beans/ well cooked and a fine bean broth is one well worth undertaking.

A big pan of beans in bean broth will keep happily in the fridge for three days. Just make sure the beans are submerged under their broth. Remove beans with a clean spoon so as not to disturb the clever self-preservation that is occurring in the pan

Peel and very finely dice the onion, garlic, carrot and celery. In a soup pot or deep sauté pan warm the olive oil over a modest flame and then the diced vegetables and a pinch of salt. Saute the ingredients, stirring and turning them regularly, until they are very soft and golden which should take about 15 minutes.

Add the beans and their broth to the pan, stir and then – still over a gentle flame – let the beans bubble away gently for another 10 or 15 minutes. You may need to add a little more bean water/broth. Taste and season again if necessary.

Serve the beans in a shallow bowl topped with two sausages. Eat.

Filed under bean broth, Beans and pulses, food, In praise of, recipes, sausages

50 responses to “Don’t forget to soak”