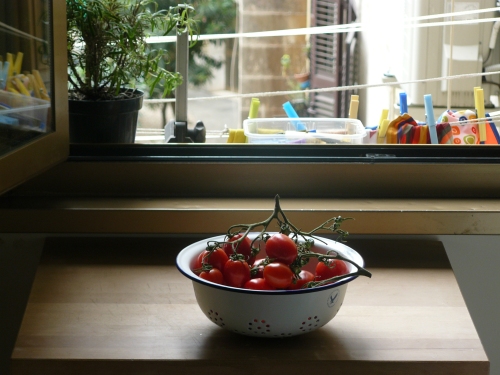 It was all so green when I left. A week away –  a bonny wedding weekend on an island in the Scottish Hebrides called Tanera Mòr and then a few days slightly too far outside London with my family – and Testaccio market is splattered, like a Cy Twombly canvas, with red. There is still green of course, a market patchwork of asparagus, peas, spinach, slim beans, forest green chard and soft heads of spring lettuce. But it’s the startling splatters: tomatoes, strawberries, crimson cherries and bunches of blushing radishes that are catching my eye.

I’ve never found peeling tomatoes a faff. Quite the opposite in fact, I find the spa-esque process – a hot plunge, a nick with a sharp knife, a cold plunge before peeling –  thoroughly pleasing. Maybe I should get out more? My carelessness with a handful of tomato skins once blocked the sink in the smart kitchen Romla and I were doing some rogue catering in. Fortunately the husband of the house, a man so handsome I turned the same colour as the tomatoes, happened to be in the kitchen while our twenty-three year old selves were peering anxiously into the blocked Belfast. He strode over (I think he might even have been wearing buff riding breeches) plunged his aristocratic hand down the plughole, scooped out the offending red skins and complimented us on the suggestive smell of dinner. 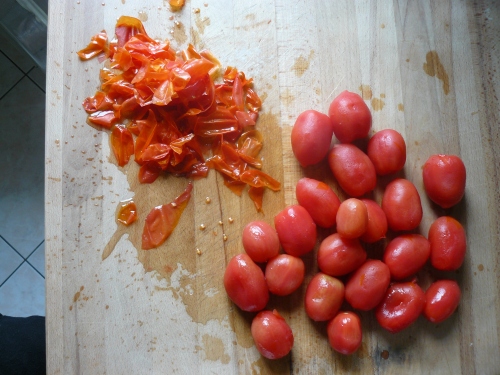 These are Sicilian pomodori Piccadilly. They are fleshy, flavoursome things the size of small plums that smell of the tangled vine they grew on. Tomatoes like this make me forget my jaded self who has shaken off much of her Roman romanticism, and remember the Rachel who first arrived in Italy nine springs ago. The woman who stood staring in gastronomic awe at the mounds of red: tiny orbs, beefy cow hearts, fat fluted saucers, pendulous plums and who ate them chopped, sliced or simply squashed idly onto bread with a careless quality of olive oil and too much salt day after day after day just because she could.

Having sung the praises of Italian pomodori when I know full well many of you might not be able to find such full hipped and red lipped tomatoes, I should hasten to add today’s recipe is a forgiving one. Extremely forgiving, as it involves the saving grace of many-a-mediocre tomato: a flesh shriveling, flavour intensifying roast. 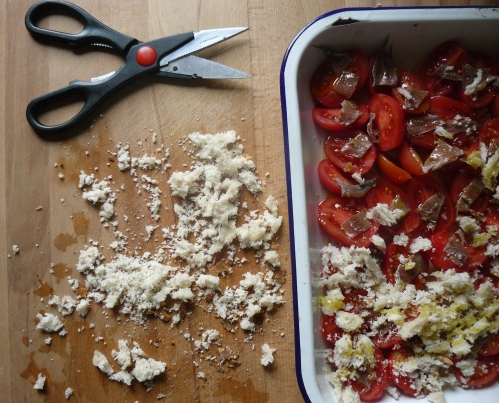 Having peeled your tomatoes, sliced them in two and set them cut-side-up in a well-oiled baking dish, you tuck a thin sliver of garlic into the soft pulp and place a quarter of anchovy filet on top of each half. You then scatter some soft, craggy breadcrumbs, a little finely chopped fresh rosemary, salt and black pepper over the upturned faces before dousing the whole tray, fearlesslessly and drunkenly with extra virgin olive oil. I find a glass of wine is helpful when a reckless olive oil hand is called for.

You bake your well-seasoned tomatoes at 180° for about 20 minutes or until they are extremely soft, collapsing, curling sweetly at the edges and starting to suggest sauce. Until the anchovies have dissolved into the tender tomato flesh and the olive oil inebriated breadcrumbs are crisp and golden. 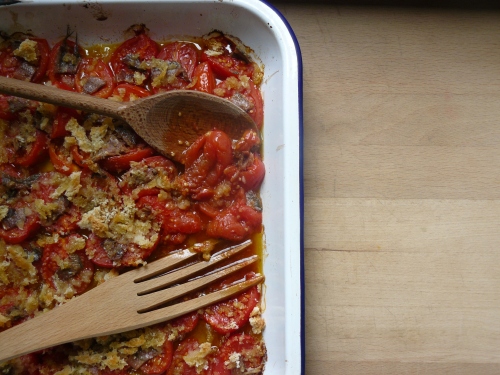 The combination of roasted tomato: sweet and savory with the intense, salty fishiness of the anchovy, a warm notes of tomato smothered garlic, the smoky, floral rosemary and crisp olive oil soaked breadcrumbs is a mighty good one. A mighty good one that sings. I agree with the brilliant Niki Segnit ‘If you have ever wondered what Unami is, a mouthful of tomato and anchovy should settle the matter.’ I’d go one step further and say a mouthful of roasted tomato with anchovies (the fat, plump Sicilian ones preserved under coarse salt that you need to soak and then de-bone) rosemary and olive oil breadcrumbs and the Unami matter is settled and some.

You could eat your tumbling mess of anchovy, rosemary and breadcrumbed tomatoes with a grilled lamb chop, pork chop or slice of roast chicken. Alternatively – and I appreciate the suggestion of breadcrumbs on bread might sound odd –  they are excellent smeared on toast. Or you could do as I did today. 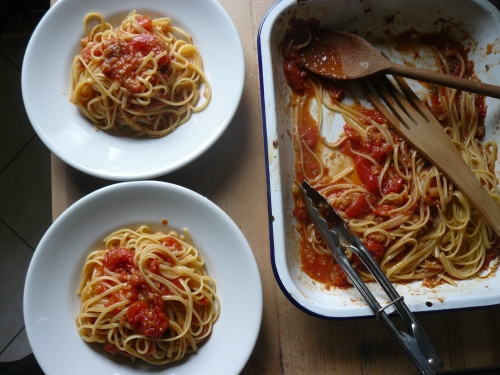 That is mash your baking tray of warm tomatoes clumsily into a rough sauce with the back of a wooden spoon and then stir this sauce into some al dente linguine or spaghetti. Don’t worry about serving bowls or dishes, mix the pasta with the sauce directly in the baking tray, making sure you diligently scrape and stir every sticky, oily morsel and crumb. Someone will also have to take a crust of bread to the tin once all the pasta is served-up.

This is how I (we) like to eat: pasta with a sauce that both strokes and punches. A green salad of lettuce, lovage and wild rocket and then a dozen crimson cherries made a nice finish to a Wednesday lunch.  Now about that flat hunting. 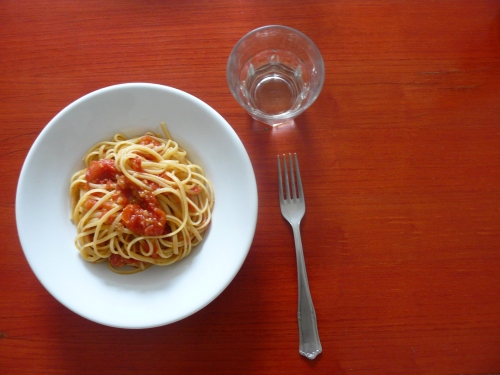 Peel the tomatoes by plunging them first into boiling water for 60 seconds and then very cold water. The skins should slip and pull away easily.

Half the tomatoes and sit them – cut side up –  in an oiled baking tin. Peel and slice the garlic very thinly. Tuck a sliver of garlic into the fleshy pulp of each half. Using scissors, snip the anchovy fillets into quarters and sit a quarter on each cut tomato. Scatter the breadcrumbs and chopped rosemary over the tomatoes. Sprinkle and grind a little salt and black pepper then douse everything very generously with olive oil.

Bake the tomatoes for 20 minutes or so or until the tomatoes are very soft and starting to collapse and the breadcrumbs are golden and crisp. You need to keep a beady eye on them. 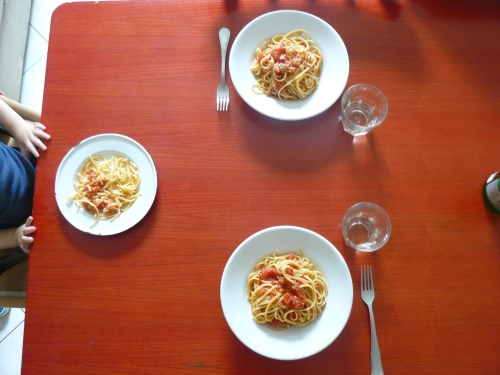