We drove for miles – our faces tight with sea salt, our shoes full of sand – looking for figs. ‘This used to be marshland‘ I was told. ‘Uninhabitable and shrouded with mal aria (bad air) until Mussolini herded down thousand of workers from the north of Italy to bonificare or make good the land‘. Now the air smells of late summer, of sea and buffaloes. At least it did on Saturday as we scuttled along in the panda. ‘Buffalo, cow, mucca‘ Luca squealed as we passed another mudbath enclosure in which barely discernible black, horned creatures wallowed. Creatures whose rich morning milk would provide our supper, this is, after all, the land of mozzarella di Bufala. We flew past signs for Sabaudia, San Felice Circeo, Terracina; seaside towns punctuating the coast between Rome and Naples.

‘Figs.‘ An emergency foraging inversion was undertaken so we could pull up alongside the tree, and a fence. A woman lurking on the others side looked over, eyes narrow. ‘I thought the tree was on the road‘ I said as we pulled away. Then I ate my stolen fig, a drop of nectar at it’s eye, its flesh tasting somewhere between honey, sweet wine and ripe berries. ‘Buffalo’ said Luca. We drove some more, passing dozens of fig trees, their branches heavy with fruit, all behind fences of varying degrees of seriousness. More signs for Terracina, Sabaudia, San Felice Circeo, another field of wallowing buffaloes. It was all beginning to feel a little like dejavu. Which of course it was! We had been here before, fifteen minutes before. We were driving in circles. Maybe everyone was right, maybe I had imagined the roadside figs.

‘Figs.’ This time there was no doubting the liberty of the tree. Nor its precarious position. Not that a bracken filled gully was about to stop me. I straddled the gap while wishing I was wearing trousers and had done some sort of stretching these last eight years. I grabbed a branch and tugged it down. Figs, dozens of them. Pause. Dozens of figs the size of grapes and as hard as acorns. At which point I let the branch ping upwards and admitted defeat. ‘I don’t understand, the trees in the gardens are full of ripe fruit!’ The stench of beast whipped through the car window and up our noses. ‘Buffalo’ said Luca. We pulled into a lay by farm shop-of-sorts, which rubbed salt into my failure. As she wrapped two trays of pale green figs and a bag of deep purple plums the woman told us it’s been a strange year for figs, what with the rain, which made me feel slightly better.

Half one tray was eaten on the way back to Rome, washed with bottled water out of the window while waiting in traffic just south of Pomezia. The other half was eaten the next day for lunch, with prosciutto, a superb combination of sweet and salty, soft and resistant. I started the second tray of figs at about 5 0 clock, with the last slice of prosciutto and a square of pizza bianca. 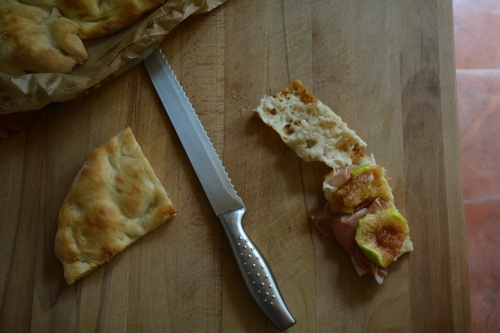 Pizza bianca: a soft foccacia-like flat bread brushed with olive oil and strewn with salt that’s made in every breadshop, baker and pizza-by-the-slice establishment in the city, is an icon of Roman food so beloved by Romans it makes me jealous. At this time of year, when figs are ripe but sodi, vinous and sweet, Romans tear and tuck them along with a slice or two of prosciutto between the two ripped halves of pizza bianca. The salty prosciutto contrasts deliciously with the sweet, floral fig, the seeds grate gratifyingly against the smooth meat and get caught in your teeth, the pizza acts as slightly crisp, oiled and salted pillow enveloping everything. Tasty and good.

As is this tart, for which I used the last six figs. An almond and fig tart, a frangipane of sorts based on the River Cafe pear and almond tart on page 282 of the blue book I have been meaning to make for at least 15 years. 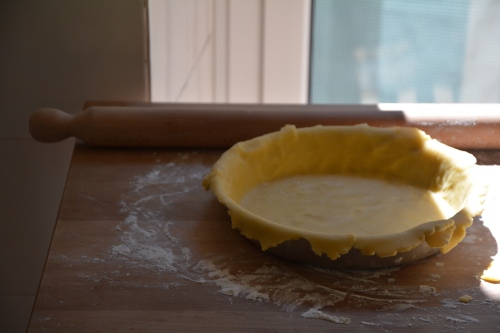 Unlike my Granny Alice and Mum, I am not a natural pastry maker. I’m afraid you see, of puffing up and shrinking down, of cracked crusts and soggy bottoms. Especially soggy bottoms, as there has been quite enough of those these last two years. I like tarts though, and like is more powerful than fear. So with cold hands I rub cold butter into flour until it looks like fine breadcrumbs, then add some sugar – not too much as the filling will be sweet enough – then a whole egg and a yolk for good measure, bring everything together and then leave it to rest in the fridge.

Once the pastry is cold you roll it into a circle bigger than the tin – overlap is important – then maneuver it into the tin, patching and pressing as you go. Then you bake this scraggy-edged tart case, with or without baking beans (I prefer without, the sticking is another anxiety I’d rather avoid) until its pale gold or the colour of a rich tea biscuit. You can neaten the tart case if you like, by breaking off the scraggy edge, or you can leave it just so. Then you fill the tart case with a coarse ivory coloured-cream of ground almonds, butter, mascarpone, sugar and egg. To finish, you stud the cream with halved figs. The tart needs at least 45 minutes in a low oven. My tart was deeper than it should have been, so it took an  hour and five minutes at 160° for the filling to set into a soft, crumbling marzipan-like affair with a golden crust, and the figs to wrinkle into even sweeter, chewier things the colour of Chianti.

A damp, dense, richly flavored tart – figs and almonds have a nougat-like quality when combined – that manages to be both homely and exotic, here and there – wherever there may be. Even better the next day and mauybe even better the day after that. Serve in smallish slices with unsweetened espessso, black tea or a dry dessert wine.

Adapted from recipe for pear and almond tart in The River Cafe Cook Book.

For the tart shell

In a large bowl rub the cold diced butter into the flour and pinch of salt with your fingertips until it resembles fine breadcrumbs. Add the sugar, stir and then the egg and extra yolk. Bring the mixture together into a smooth, cohesive dough.  This can be done in a food processor. Wrap the dough in cling film and chill it for at least an hour

On a floured board roll the dough into a round at least an inch larger than your tin. Using the rolling-pin, maneuver the dough into the tin and then press it down carefully, patching any cracks. Leave the overhang. Bake blind for 20 minutes until very light brown. Reduce the oven to 160° / 300 f.

While the tart case cools a make the filling by mixing together the butter, mascarpone, sugar, almonds and eggs. Spoon this cream into the tart case, smooth it out a little with a fork and then stud the cream with fig halves – seeds to the sky.

Bake the tart for 45 – minutes to an hour or until  the filling has set firm and has a nice, golden crust and the figs are wrinkled and dark red.