I keep writing good with pizza bianca, serve with pizza bianca, eat with pizza bianca in recipe notes for the book. Which is all very well for readers living in Rome, therefore within shouting distance of one of the countless forno daily paddling hot pizza bianca from the gaping mouths of ovens, brushing them with olive oil, strewing them with salt and then slicing them just for you. Less so, much less so, for everyone else. ‘You will just have to do a pizza bianca recipe for the book‘ said my Mum, who is here for the week and being the best baby sitter I could ask for. ‘But I can’t even make bread, never mind pizza bianca and while we’re at it, I can’t write a book, I can’t even write E mails and I hate my hair and all my clothes’  I said in a grown up way.

Then I read a recipe in a book I received for my birthday. A book about pizza by a maestro, the so-called Michelangelo of Pizza (although I don’t think he was the one who coined that immodest soubriquet, he prefers Re or king) a man of broad shoulders and impressive hands; Gabriele Bonci.

I can I told Laura as I paid for a bag of 0f Mulino Marino flour from her Emporio delle spezie. I can I told myself as I weighed out the ingredients. I can I muttered as I mixed the flour with the yeast, the salt, the water and then a dram of extra virgin olive oil. I can’t I thought as I surveyed the wet, sticky, mass clinging like particularly adhesive putty to my spoon, my fingers and the sides of my tin bowl. I covered it hastily with clean cloth for its first rising and took empty solace in social media. 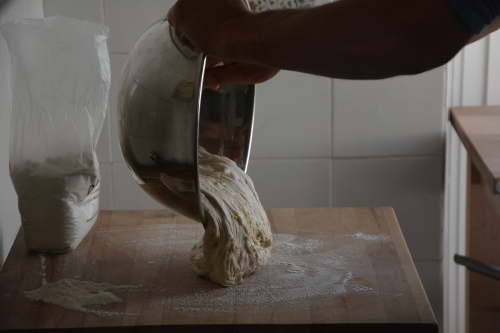 At which point Dan arrived. Dan is my all baking, beering friend who just happens to have done a Bonci pizza-making workshop. ‘It’s the 70% hydration, it should be sticky’ he explained in a bakers tone before tying on my apron and setting to work. It’s a properly sticky affair, you do this wonderful, gentle pull and fold motion, the Piegature di rinforzo which means folding to reinforce. By stretching and folding the dough gently, developing the gluten and incorporating air into it you render it altogether more manageable. The joy of watching.

The dough then sits in the bottom of the fridge, balanced on the vegetable box and beside the dubious bottle of dessert wine for 24 hours. It’s a slow, steady swell, a true lunga lievitazione that reminds you dough is a living thing. I kept peeping at my pale dejeuner sur l’herbe bottom-like dough all day. I woke up at 3 am sweating and fretting about the gas bill and other animals and was reassured by my ever-increasing bowlful. By (late) breakfast the next day, 23 hours after Dan’s Piegature di rinforzo my bowl was full.

I’m not sure why handling freshly risen dough is so nice, but it is. The key is being as gentle as possible as you cut the mass into 350 g pieces (5), fold and shape them into a balls (and leave them to rest for another half hour.) Once rested you massage and very gently – this is all about the lightest, pattering touch –  press the dough into a tin-shaped form on an evenly floured surface before lifting this soft cloth-like rectangle into an oiled tin.

I particularly like Bonci’s note that in his experience the cheaper the tin the better it cooks. My tin is a bog standard 30 cm x 30 cm one with a thin base that I inherited with the flat. You pour a thin stream of olive oil over the surface of your dimpled dough.  You have preheated the oven to 250° or 480F.

My Pizza took 25 minutes (15 on the floor of the oven then 10 on the middle shelf) until it had the requisite characteristics: a firm bottom, full-bodied, tender center punctuated with pockets of air and a burnished crust. I brushed the top with a little more olive and was generous with the salt. It was nearly as good as the pizza I’ve eaten standing on the pavement outside Bonci’s small but perfectly formed Pizzarium. Well. Nearly.

In a world where we are often told we don’t need to fold, or rise, or wait, that we can just fling things together in a jiffy and making too much of an effort is fussy, this way of making pizza might take you aback. It did me at least. But then it didn’t. It makes absolute sense that to make something so good from very basic ingredients – flour, water, yeast, oil and salt – you need something else, two things actually; not a little effort and time.

I am not sure there are many things tastier than freshly baked pizza bianca, warm, crisp at first but then giving way to a proper mouth arresting chew, oil and salt clinging your lips.  This is one of the best things I have ever made. The end. Or the beginning.

I may have eaten more Pizza than is decent and watched it being made many times, but this is the first time I have made it at home. I am pretty damn happy with the results – horray for Gabriele Bonci and long slow rising. I hope I have made things clear below. Elizabeth’s blog post and video are very helpful. If you are serious about pizza, I recommend Bonci’s book, which is now available in English.

Makes 5 square pizza which each divides into four nice slices.

In a large bowl using a wooden spoon mix together the flour and the yeast. Then add the water, gradually, once it is incorporated add the salt and the oil. Mix until you have a pale, sticky, putty-like mixture. Cover with a clean cloth or cling-film and leave to rest for an hour at room temperature in draught-free part of the kitchen.

Scrape the mixture onto a lightly floured board. It will still be sticky. This stage is called the Piegature di rinforzo which means folding to reinforce. With lightly floured hands gently stretch and pull the edges of the dough and fold them back over themselves. Try as best as possible to turn the dough 90° (it will stick) by using a dough scape or spatula and repeat the pull and fold. With this repeated pulling and folding, the incorporation of air and the residual flour from your hands and the dough will get drier and become like a soft and manageable. Bonci suggest you repeat this pulling and folding motion three times, pause for 20 minutes, repeat, pause for 20 minutes and then repeat.

Put the soft dough into an oiled bowl and cover it (cloth or clingfilm) then leave it for 18 – 24 hours at the lower half of the fridge.

You pull the bowl from the fridge and leave it to it for 10 minutes. Carefully lift the dough from the bowl and cut it into 5 pieces of more or less 350 g – you can use a scale. Working piece by piece, shape the dough into a ball, fold it over once as you did for the Piegature di rinforzo and leave it to sit for another 30 minutes at room tempertaure away from draughts. Set the oven to 250°c/ 480F.

The final stage needs to be done with a delicate touch – you don’t want to squash out the air you have so patiently incorporated. On an evenly floured board, using your finger tips and starting from the borders and then working up the center of the dough, push and massage it into a square the size of the tin. Once it is more or less the right size, drape it over your arm and then lift it into a the well oiled 30 cm x 30 cm lipped tin /baking tray or pizza sheet. Zig-zag the dough with a thin stream of olive oil.

Bake on the floor of the oven for 15 minutes, check the pizza by lifting up the corner and looking underneath – it should be firm and golden. If it seems nearly done, move it to the middle shelf of the oven for 10 more minutes. Pull from the oven. Brush with more olive oil and sprinkle with salt. Slice and eat.

85 responses to “the slow rise”