what’s in a jar

My mum makes mincemeat every single year. For years I helped, stirring the ever darkening mass of dried fruit, candied peel, apples, nuts and suet, then squashing it into jars.  I liked the way the house smelt, a spiced and boozy fanfare for festive things to come. We’d have the first batch of mince pies in mid December, the pastry scented with orange zest, still warm from the oven.

My dad would eat whole pies in one gulp, which we thought was hilarious and my mum would say ‘Martin really, you’ll just encourage them‘ Which of course he did. Jar after jar was spooned into round after round of pastry, warm pies presented at every opportunity, to postmen and neighbours, callers, and us, especially us. Of course a mince-pie was always left for father christmas on christmas eve. The next morning we’d find it half eaten and Ben would say ‘It’s icing sugar and Dad did it‘ while Rosie stared at Father Christmas’s snowy footprints. 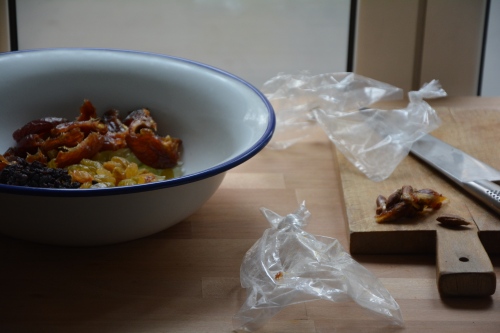 Then for years I didn’t help. I didn’t eat the pies either. I’d eat a whole jar of mincemeat though, crouched on the cellar stairs when everyone else was in bed. Then I’d feel as dark as the contents of the jar I’d just eaten and furious. Furious with the mincemeat, my with mum for making the bloody stuff, with myself.

It went on for years, mincemeat, like so many things, was something to be battled with, first with steely resistance, then otherwise. Later, it was on a list, two actually, to avoid and gratitude. I can’t remember exactly how it worked? Avoiding things but being grateful for them at the same time maybe! Looking back it all seems so absolutely absurd, comical even, that it’s hard to remember it made absolute sense at the time.

I don’t make mincemeat every single year. However when I do, everything is there, swirling around in the spiced and boozy scent, 41 years of mincemeat, of pans stirred and pans not stirred. I could get absorbed in detail, nostalgic or absurd, but I don’t, enjoying instead the heady vapours and a nip of brandy.

Luca clambers up on chair and demands a stir. His little hands clasp the wooden spoon and flick it upwards and then downwards splattering the stove, an amber fleck handing on his wrist ‘ It’s hot meat’ he tells me.  I feel relieved Luca is a boy and yearn to talk to my mum.  As I spoon stuff into jars and screw on the lids, I remind myself it’s only mincemeat.

Usually I make Jane Grigsons mincemeat (which is turn Mrs Beeton) from English Food. Not having found suet, I made Gloria Nicol’s apple and quince mincemeat, two batches actually, the first back in October. Unlike JG’s recipe the mincemeat is cooked, in cider no less, for about an hour, the result is glorious, thick, rich, fragrant, well-spiced mincemeat to which you add (plenty of) brandy. Purist will not agree, but I think it is just as good as mincemeat with suet.

Adapted from Gloria Nicols recipe in the Guardian.

Gloria notes this makes 1.75 g of mincemeat. Both my batches filled 3 standard jars and one smaller jar. For those in Rome I bought all the Ingredients from Emporio delle Spezie in Testaccio, it is an Aladdin’s cave of spices, herbs, seasonings, dried fruit, nuts, grains and tea – all sold by weight.

Put 3 scrupulously clean standard jars and a smaller one with lids in a low oven to sterilize for 10 minutes.

In a large heavy based pan warm the cider and sugar, stirring to until the sugar has dissolved. Peel, core and chop the apples and grate the quince if using them. Add all ingredients except the brandy, to the pan. Over a low flame let the mincemeat simmer and bubble gently for around 1 hour – stirring every now and then – until the apples have turned into puree and the mixture looks rich and thickened.

Remove from the heat, allow the mincemeat to cool and then stir in the brandy. Spoon the mincemeat into the sterilised jars and seal immediately. Leave for a month – and up to a year – to mature before opening.

Why wait until christmas ? I like my pastry plain, unsweetened and more crisp than crumbly. My tin is a fluted and measures 8″ across.

In a bowl rub the fat into the pastry with your fingertips until it resembles fine breadcrumbs. Add the salt and then enough water to bring the ingredients together into a smooth soft dough.

On a floured board roll the dough into a round a little large than the tin. Carefully lift the dough into the tin and press it gently into the base and the edges. Trim the overlapping pastry and set the scraps aside. Leave the pastry case the fridge for 30 minutes.

Spoon the mincemeat into the case and then decorate the top with lattice or a pattern. Brush the pasty with beaten egg and bake at 180° for 30 minutes. 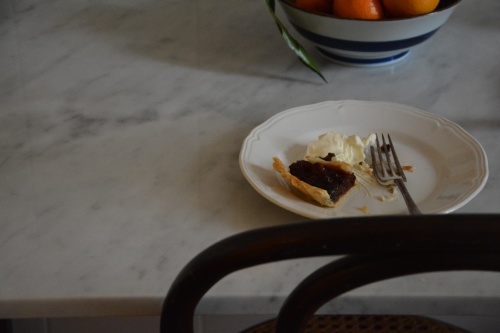