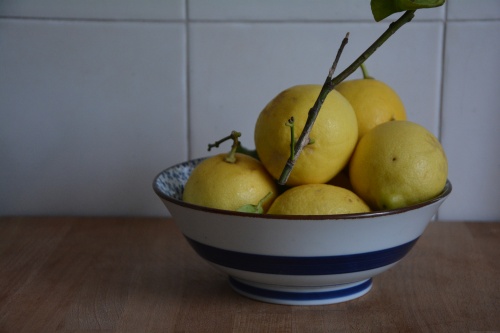 Even a tiny triangle of lemon embellishing a drink was enough to make my grandpa shudder and suck his breath. Vincenzo’s grandfather on the other hand ate a lemon a day, skin, pith and flesh all. Now to be fair, there was a continent of difference between the two lemons. Between the heavily waxed, leather-skinned, shockingly sharp ones my grandpa might have found a triangle of in his drink in an Northern English pub in 1980 (my other granny had one such pub and I was a deft hand at slicing lemons and pulling pints by the age of 8) and the pale, fragrant, almost sweet lemons Vincenzo’s grandfather grew on his farm in Sicily.

That said, I still like the (unfair) comparison between the two; John Roddy grimacing at the sight of a small yellow triangle in a pub near Sheffield, Orazio D’Aleo eating the whole fruit in a field in southern Sicily. Apart from the citrus difference and the language, we think our Lancastrian and Sicilian grandfathers would have got on well, in an awkward, silent way.

Lemons are important in this house, Vincenzo doesn’t eat them whole, but almost. He squeezes them in and on the obvious: fish, salad, vegetables, tea, and the less obvious; strawberries, watermelon, bread, potatoes, espresso. He also washes the dishes with the squeezed out halves. Although less exuberant with my squeezing and still trying to get in the washing up-habit, I am – and this is might sound like pseuds corner – devoted to Italian lemons, delighted by their pale, unwaxed skins and oily spritz, gentle pith that’s as thick as a thumb and flesh that tastes clean and citric.

Rainy days and the fact everyone has been under the weather has made the bowl of lemons even more imperative, and not just for their suggestion of sunshine. Lemons have been lifting, cutting, sharpening, encouraging and brightening. They’ve been squeezed with blood oranges to make juice the colour of a desert sunrise, spritzed on greens, fat fringed pork chops and into my eyes, twisted into dressing for salad and vegetables and then – for the third time this week – grated into batter for a cake.

I’ve written about this cake before and I’m sure I will again. It’a actually the only cake I can make with any sort of ease, which has much to do with the inclusion of olive oil which renders everything, including cake batter, sleeker and more effortless. I think I could make it blindfolded, although it’s probably best I don’t try. Three cups of flour, one of olive oil, one and a half of sugar, another of yogurt, some baking powder and the zest of two lemons (which also clears your sinuses and lifts your spirits, although not as effectively as a gin and tonic with a curl of lemon peel) all whisked (energetically) together into a pale, creamy batter which you bake in ring-tin until firm and golden.

Simple and good, an everyday cake with a dose of mood lifting citrus. An accomadating cake that is as comfortable on a breakfast table as it is wrapped in a paper napkin and stuffed in a pocket for a morning snack, as good beside a cup of tea at about 4 as it is with a beaker of hot milk (with a nip) at about 9. I think both grandfathers would have approved. Serve in wedges or eat the whole thing, it is entirely up to you.

You need a ring-tin. I used a 100 ml glass as my measuring cup which worked well. Many people use a small yogurt pot (100-125 ml) as the measuring cup, which works well too. This is a small cake, which I’m sure many of you may like to double, which means adjusting cooking times accordingly. I have not tried this yet, so would appreciate feedback from anyone who does. Update from my friend Elizabeth – my cup, or a small yogurt pot (100 – 125ml) is a half US cup. The cake can also be baked in a loaf tin, small loaf tins or doubled to fill a bundt tin.

Whisk together the flour, olive oil, sugar, yogurt, eggs and baking powder in a large bowl. Grate over the lemon zest and whisk again (vigorously.) Pour the batter into a greased and floured ring tin and bake for 25 – 30 minutes or until the cake is golden and cooked through (I test with a stand of spaghetti). Allow to cool before turning onto a plate.

65 responses to “the whole triangle”