A story that isn’t about sauce.

Last night a new friend invited me over for dinner. She had also invited another mutual friend who now lives in the US so I’d taken a bottle of sparkling wine chosen from the scant selection in the fridge in my local wine shop before grabbing a taxi. Not a bottle I would have usually picked, but I hoped it would be good. My friend’s husband opened the bottle as we stood on their balcony on a sultry and still July evening in Rome, he poured, we raised glasses and drank.

The wine was odd, not terrible, just odd, sort of sour! Or was it the fact I had cleaned my teeth not long before? I took another sip hoping it would taste different, which it didn’t. I tried combining it with a toasted almond, then tasted again.

As I said, they are new friends with whom I feel comfortable, but not enough to say ‘I think this is a bit odd, lets ditch it and open another bottle.‘ I took another sip, hoping my persistence would improve things (it didn’t) by which point it felt too late to comment as everyone else was drinking so to do so would question their taste buds. Or where they merely drinking politely thinking this is odd and wondering why the person who brought the bottle isn’t saying anything? Then again maybe it was the particularly minty toothpaste?  In short, in the shortest time I completed a half marathon of anxiety and ate almost the entire bowl of almonds.

We sat down and my anxiety and the taste of the sparking wine ebbed away with each sip of nice red in easy company. The smell of dinner was as enticing as you’d hope, ‘It’s beef braised in red wine’ said my friend. ‘Made with meat from a new butcher’ so she hoped it was good. It was, especially with the pilaf of rice and mushroom and slender green beans. My friend however, picking up the anxiety baton I had dropped, was disappointed. ‘It was tough‘. Everyone was too busy eating to reply. ‘It’s tough‘ she said again, this time posed as a question. ‘It was firm’ was the answer.’ ‘But extremely tasty.‘ Plates were handed back for seconds but even that didn’t convince the cook who was quiet until eventually conversation and wine drew her back in. Salad, pudding, coffee, amaro and more conversation followed. It was a good night and I left late liking my new friend even more than when I’d arrived.

This morning as I waited for the coffee to gurgle out of the moka, my phone beeped with a message asking me about the name of book I’d mentioned and apologizing for the beef again. First I drank my coffee, each sip chipping away at my not unpleasant amaro head, then I wrote back to tell her the beef was firm but damn tasty and that the name of the book – a favorite – was Laurie Colwin’s Home Cooking.

Possibly the ideal book given the circumstances and our short relay of anxiety the night before. ‘Home Cooking’ is the antidote to most food writing malarkey that tells us things should be perfect and effortless and the hostesses unflappable, a funny and wise collection of kitchen essays that touch on the human, therefore imperfect, nature of home cooking. It is a book about ordinary delights, but also fiascos and disappointments; ingredients that don’t behave, dishes that don’t turn out as they should, dinners we cook for friends that we wish were different, the sour and the tough if you like, which others might not have thought was sour or tough at all.

As I tapped the old grounds out of the coffee pot into the bin and watched most of them fall on the floor, refilled the pot and put it back on the stove, I had another wave of anxiety about the wine (I hold onto anxiety in the way some people hold grudges: I still cringe about the homemade humus with a hair in it I took to a dinner in about 1998). There was only one thing for it; have a gin and tonic! Unfortunateley it was nine in the morning! So I did the next best thing, I planted my son in front of a video, poured my third coffee and sat on the sofa to read Laurie Colwin. 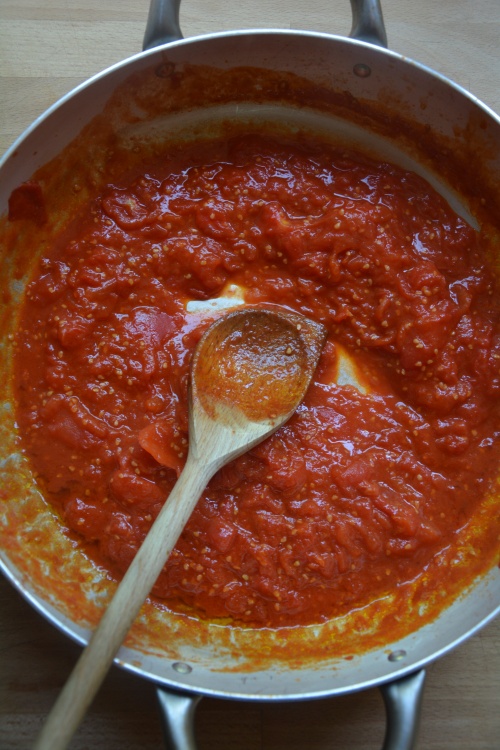 The sauce that has nothing to do with the story.

A summer sauce for when good flavoursome tomatoes are plentiful and cheap (ish). Peeling the tomatoes might sound a bit of a faff, which it is, but only for a few minutes and it is undoubtedly worth it. Having peeled and roughly chopped the tomatoes you cook them in lots of garlic scented olive oil until any extra water has evaporated away and you have rich, sauce that clings insistently to the pasta and your child’s face. It is one of my hands down favorite things to eat.

Fresh tomato sauce for with spaghetti or penne

Peel a kilogram of flavoursome tomatoes by plunging them into boiling water for a minute, then cold water for another 30 seconds at which point the skins should slip away easily. Cut away any hard-core or hard white flesh, then chop the tomatoes into rough pieces, ideally over a plate to catch any juices.

In a large frying pan, warm 5 tablespoons of extra virgin olive oil and a peeled squashed garlic clove over a modest flame until the smell of the garlic rises up from the pan (do not let it burn). Add the tomatoes and a big pinch of salt and stir. Let sauce simmer for 10 – 20 minutes or until – with some of the water evaporated – the sauce is thick and saucy. Add a few torn basil leaves, stir and then remove from the heat.

For four people, cook 500 g of spaghetti in fast boiling well-salted water until al dente, drain and mix with the sauce (which you can warm gently if a significant amount of time has passed since you made it) and serve immediately. 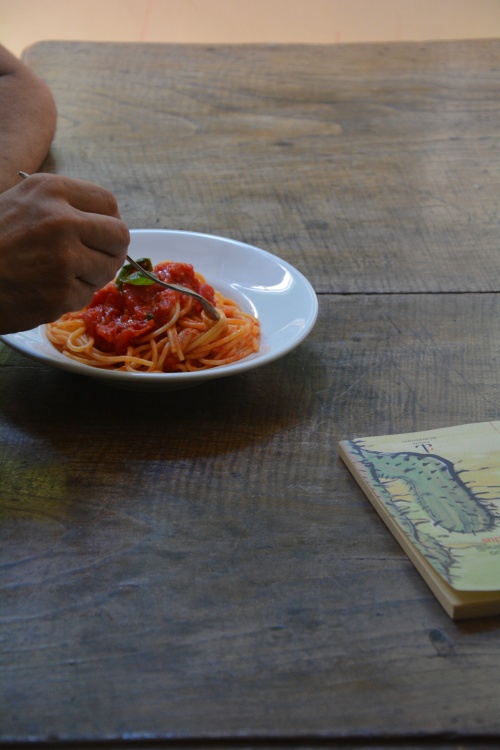 I am, as many of you know, writing a book, which is why I am here so intermittently. We are about to start the editing process and work on design, by October I should be back each week. Meanwhile I am posting on Instagram and continue to miss you more than you miss me. Rachel.

75 responses to “sip and sauce”