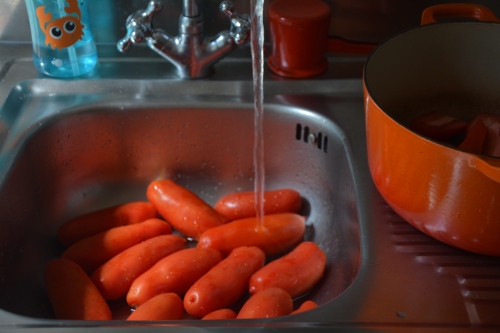 In the early 1980’s my grandparents decided to move from the North to the South of England. I loved Phyllis and John and was extremely happy – as we all were – that they were coming to live nearby. At the same time I felt real anxiety about my gentle Lancastrian grandpa and Yorkshire grandma moving from the reliable North Yorkshire market town they had lived in for 25 years, to our commuter town just North of London.

I remember the day they arrived for good, their mustard coloured car reversing up the drive, John in a tweed cap and driving gloves, the arm of his glasses dangling from his mouth, Phyllis hugging her handbag. Somewhere in the car there would have been a thermos flask, in it an inch of tea.

I needn’t have worried, in no time they had established where to buy the cheapest petrol, Yorkshire tea, joined the library, several local associations and were on discussing-hiatus-hernia-terms with various neighbours over tea and fig rolls. They had also begun picking up my brother, sister and I from school once a week and then taking us to their garden flat where they would to give us tea then supervise homework until my Dad picked us up on the way home from work.

Running from Grandpa’s car up the garden path the smell of tea would greet us long before my grandma did at the front door. It was almost always the same: potatoes, carrots, onions and corned beef simmered into a stew called tattie hash which we would eat with buttered bread watching John Craven’s Newsround as the living room windows and my grandma’s specs steamed up in a comforting-claustrophobic way. My grandma would save a portion for my dad and it would sit, sweating under a plate hat, while we did our homework. When dad arrived he would balance his plate on his knee and watch the 7 o clock news. While he ate, my grandma would fuss, and Dad would tell her not to, even though I think he liked that she did.

We loved all tattie hash as much as we loved our grandparents, and so when a school friend back for tea was rude about it, I was furious. As far as I was concerned it was beyond any sort of judgment, even less criticism. Tattie hash was like my grandma; comforting, straightforward, generous, warm and (most importantly) something you could count on.  It was also to be finished if you were to have pudding, which was mostly rice pudding or tinned peaches with evaporated milk, the fruit syrup curdling the milk, which sounds unsavory but isn’t. Or is it? Again, it was beyond criticism.

But then I did criticize. I was about 12 and in horrid mood the day I told my grandma that tattie hash was sloppy and boring, that only old people ate the same thing again and again. I wanted to take back the words as soon as they came out and I watched the hurt shoot across my grandma’s forehead like a crack. A few years earlier she would have said something sharp back, but not then. I said sorry many times, but it never felt enough. 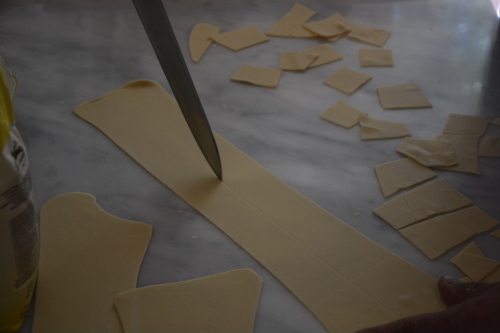 I still wish I could take the words back. While I was at it, I would also thank her for all the buttons sewn back on, holes in the elbows of jumpers darned, holes in knees plastered, purple fruit pastils saved and tell them both how important tattie hash Tuesdays were, those comforting-claustrophobic evenings in the maisonette flat on Cowper road. I would also tell them that after years of kicking against any sort of routine, I now like nothing more than making the same thing again and again; pasta and tomato sauce mondays, roast chicken tuesdays (which means chicken soup wednesdays). Pasta e fagioli Fridays.

‘Pasta and beans! Well that does sound exotic’  Phyllis might have said if she were still here.

‘That would give me heart burn‘ my grandpa might have said from the sofa (everything gave him heartburn).

‘Oh John, do give over! Pasta and beans sounds lovely Rach. Now lets have a cup of tea and you can tell me more about the part of Rome you live in, Testicles is it?’

‘Testaccio grandma, it’s called Testaccio. Well there is a market you would love and……’

Pasta e fagioli too, is comforting, straightforward, generous, warm and (most importantly) food to be counted on. Which is why is I have written about it twice and mentioned it countless times here. This version is for fresh borlotti and fresh pasta and is one of my favorite things to eat.

Cover the beans with enough cold water that it comes at least 2 inches above the beans. Bring to a very gentle boil and then reduce to a simmer for 30 mins for until the beans are tender but still firm.

Meanwhile in a large, deep saute pan or casserole, warm the olive oil over a low flame, add the peeled and gently crushed garlic cloves and rosemary and fry them gently until fragrant. Peel and roughly chop the tomatoes and add them to the pan, raise the flame just a little and cook the tomatoes for ten minutes until soft and saucy. Add beans and a ladleful of bean cooking water then let the pan bubble away for another 10 minutes. Season with salt generously.

Add another couple of ladleful of bean cooking water and then the pasta. Continue cooking, stirring pretty attentively until the pasta is tender. You may well need to add a little more water. Serve immediately and eat.

Talking of Phyllis and John I wonder what they would have had to say about the cover of the book. Plenty, I imagine. It is – as you can see – a picture of my kitchen sink, a large quantity of apricots from my friend Jeannie’s tree, a scrubbing brush, a bottle opener, a bottle of limonata and a jam jar of parsley. Oh and a roll of kitchen towel, an enormous, useful thing that if I had thought twice about the picture, I might have moved. I am glad I didn’t. We looked at dozens of my pictures but this was the one –  snapped as I cooked one day – that we kept coming back to. Now cover chosen, writing done and pictures taken (all the food shots are mine taken in real time meaning meal time/ the beautiful and honest shots of Testaccio taken by brilliant Nick Seaton) the book just needs putting together. I say just! The publishing date in The UK is June next year but you can pre-order if you wish. The book will be published in the US in early 2016. Meanwhile I am looking forward to being back here a lot more.- R 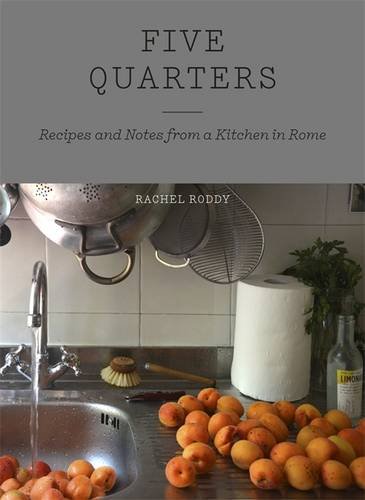