the zest of it

It’s good to be home. At least it is now. The first couple of days were pretty grim, when the fall-out from a hasty pre-Christmas departure, now coated in three weeks of dust, met three suitcases full of dirty washing and a flock of christmas presents. For the first half hour I sat staring at the sink, wishing I had at least done the washing-up (impressive slovenliness, even by my standards) while Luca shook the dry-needles from the christmas tree into the rug.

I am still picking needles out of the rug and the underneath of my socks, but apart from that we have more less got back into a rhythm. I am back in a kitchen rhythm too, and order of sorts, which I find reassuring – my grandpa Roddy called it having your stall laid out. No resolutions or anything like that, just a comfortable rhythm, one that feels like good tights: supportive but not restrictive (and never too loose). I am back at the market most days too, my ordinarily beautiful market, which smells faintly of fish on one side, meat fat on the other and in the middle is January coloured: green, orange and the extraordinary greeny-violet of artichokes which are coming into season. On the first day back my and veg guys shouted Ahò and made the pinched fingers where the hell have you been gesture over the crowd. It was the sort of singling out I know they do for many, but it never fails to make me feel happy. A kilo of oranges, 8 artichokes, a massive bunch of kale that needed to be wrestled into a bag, some parsley and mint shoved in the top of the bag at no cost except loyalty: it is good to be home.

As I said, no resolutions, but after a bloody delicious Christmas and New Year in England, where food came in thick, rich waves, we are craving green, bitter and sharp: kale, raddichio, broccoli, artichokes, lemons, oranges, pasta and lots of olive oil. ‘Mum, I like it when you stink of oranges‘ Luca told me the other day. I like stinking of oranges too, having the zest under my nails, my lip burning hot because I touched it with a zesting finger, the oily scent strong enough to help me forget the sink is still slightly blocked.

I have been cooking from Fabrizia Lanza’s book Coming Home to Sicily, which Vincenzo, my Sicilian, is extremely happy about. It is a beautiful book, but not intimidatingly so: the recipes are too lovely and down to earth for that. The first thing I made was lentils with orange zest and mint, a recipe which transported me back to the case vecchie kitchen last summer where Fabrizia, Giovanna, lauren, Lou, David and I stood chopping onion and mint, and zesting oranges, the combined scent almost seeming an exaggeration of itself. While I chopped in my small Roman kitchen Vincenzo came and sat at the table, noting it felt like a Sicilian bong. As I mixed the pile of mint, orange zest and parley with warm lentils another wave of good smells filled the kitchen.

I also made zucca in Agrodolce or sweet and sour squash. I have been searching for a recipe like this ever since eating a dish of zucca alla scapace at a good local trattoria called Flavio al Velavevodetto just before christmas. Where Flavio’s Roman version used chunks of pumpkin cooked in olive oil, vinegar and sugar, Fabrizia suggests slices of butternut squash. The slices are griddled until tender and seared with dark lines, then dressed with red onions sautéed until soft and slightly caramelized in extra virgin olive oil, vinegar and sugar.

The combination of tender, velvety squash and the sweet, sharp onion is excellent. It can be eaten straight away, but is even better after a few hours when the flavors have really taken hold. The lentils, warm with citrus and mint, made a good partner for the squash, as did some ricotta di pecora. In between mouthfuls of lunch and sips of local red wine that reminded me of wild cherries, we agreed that we should visit Sicily in March – after all there is a family house there that is long neglected.

The next day the leftover Zucca in agrodolce was better still. We ate it with boiled potatoes and kale dressed with salt and olive oil. The remaining three half moons were chopped and became orange flecks amongst the leftover potato and kale I used as a filling for the bread crust torta rustica I am going to write about next week. So until next week. 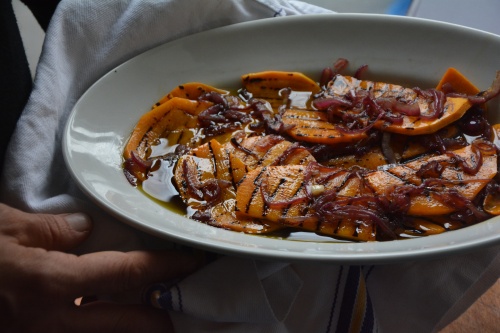 adapted from Coming Home to Sicily by Fabrizia Lanza

Cut the squash in half, pare away the skin and scoop out the seeds. Slice each half crosswise into 5 mm thick slices.  Heat up the grill-pan over a medium flame. Cook the squash slices in batches, over a medium heat, flipping them when deep grill marks appear. Once cooked, remove the slices onto a deep plate or shallow dish, season with salt and cover loosely to keep warm.

Meanwhile, peel and slice the red onion. In a small frying pan, over a medium/low heat, fry the onion on the olive oil until  it is soft, which will take about 5 minutes. Season with salt and pepper, stir and then add the vinegar and sugar and continue cooking until slightly reduced and caramelized, which will take (roughly) another 5 minutes.

Pour the onion and its sticky juices over the grilled squash. leave to stand for about 15 minutes, carefully turning the pieces after about 6 minutes. Serve warm.

Leftovers keep beautifully and it could be argued, improve. Cover with cling film and keep in the fridge. Remember to pull the dish out of the fridge at least half an hour before eating.

adapted from Coming Home to Sicily by Fabrizia Lanza

In a medium pan, cover the lentils with a liter of cold water. Bring the lentils to the boil. then reduce to a simmer for 20 – 25 minutes, or until the lentils are tender. Drain the lentils and put them into a serving bowl.

Chop herbs and add to the bowl, add the olive oil, lemon juice, salt and finally grate over the zest. Stir, leave to sit 5 minutes before serving, stir again and serve (pouring over a little more olive oil for shine if you fancy).

Again, leftovers keep beautifully. Cover with cling film and keep in the fridge. Remember to pull the dish out of the fridge at least half and hour before eating.

This June 15 – 20, Luisa Weiss and I are going to be leading a 5 day food writing workshop we have called the Language of food at The Anna Tasca Lanza cooking school in Sicily. The idea is that before we arrive we will share and collectively read six pieces of food writing including Gabriele Hamilton, Mary Taylor-Simetti, Laurie Colwin and Molly Wizenburg. These pieces will form the basis and starting point for our discussions before we begin to look at how we can develop our own writing voices. We will of course also be cooking with Fabrizia, walking, exploring the estate and Fabrizia’s garden, taking excursions and drinking campari and eating panelle in the camomile scented courtyard together. I think it is going to be a creative, thought provoking, inspiring, beautiful and delicious five days and I really hope some of you are able to come. – R

If you would like to know more, you might like to read the post I wrote last year having just come back from Sicily. Melissa also wrote beautifully about the school. The calendar and details are here.