I first ate pesto in St Albans. Years later, I would eat it in a rather sleek port side trattoria in Genova, the real deal, pesto alla Genovese, a bright green paste binding trofie pasta – a short twisted shape with tapered ends  – with just a little collapsing potato and fine green beans. But the first time had been when I was 14, in a town five miles nearer to London than my town, called St Albans. It was the first real date with the boy who was to become my second real boyfriend, who would later, if not break, offhandedly hurt my heart (the git.)

I can still remember him, wearing blue acrylic Adidas shorts, scraping the contents of a small jar into flat spaghetti called Lin-gwee-knee. The stuff coming out of the jar was darkish green and smelt like dried herbs, cheese and mothballs. It wasn’t entirely unpleasant. ‘It’s pesto‘ he said.  I was given the job of mixing the pasta and pesto, which clumped into a large ball. It would be another 18 years until I learned the secret of pasta cooking water. Undeterred, we untangled the ball in two, then ate our supper listening to David Sandbourne’s 1980’s smooth sax. Even with the mustiness, I thought it was one of the best things I had ever eaten. As it got dark, I balanced on the cogs on the back of his BMX and he rode me up a very steep hill to the train station, a feat I read like tea leaves. It was meant to be. When we kissed goodbye, he tasted of pesto.

Pesto comes from the Italian verb pestare that means to pound or crush, a job best done with a pestle in a mortar. The most famous of the pesto family, pesto alla Genovese, a distant manufactured cousin of that which I ate all those years ago in St Albans was – and occasionally still is – made with a bulbous wooden pestle, in a heavyweight marble mortar. Watching someone with experience and skill make pesto with a pestle is as wonderful as the final dish. To start, the garlic (with a pinch of salt) is pounded and crushed against the sides of the mortar. Once the garlic is disciplined, the basil leaves are added – ideally the small and tender leaved Genevese variety – and pounded into a bright green paste, at which point the pine nuts are added and pounded too. To finish mix of grated pecorino and parmesan cheese is then added bit by bit, each addition helped with a little extra virgin olive oil until the desired consistency is achieved. I was once told pesto should be corposo(have body) , that it shouldn’t correre (run) like a naughty child (mine), but sit like an obedient one (not my child). Later the addition of pasta cooking water will help loosen the pesto into an accommodating pasta-clinging consistency. I should stop here though, there are experts and consortia of pesto alla Genovese. I am simply an enthusiastic fan.

I have made pesto alla Genovese with a pestle and mortar, or rather Vincenzo and I did together, me instructing, him pounding. It was a laborious task , but a satisfying one and the pesto was fragrant with real texture. Laborious though. Then I broke my mortar*. These days I make it less laboriously and much faster with my only electric kitchen tool – a faithful immersion blender. Like so many Italian recipes, pesto alle Genovese is one that needs no innovation (garlic, basil, pine-nuts, grated hard cheese and extra virgin olive oil are a brilliant combination) but demands your imprint as you make it your own by making it again and again finding best method and proportions. I put the garlic, basil and pine nuts and just a dash of olive oil in a tin bowl and then with short pressing pulses reduce everything to a paste. I stir in the grated cheese and olive oil bit by bit, with a spoon, as opposed to more pulses, as I prefer the texture that gives. This is known as green sauce in our house and it is an absolute favorite. I make it most weeks. If we don’t have the ingredients, well, that brings us to other sorts of pesto.

Pesto, a pounded sauce, can of course be made with many things. Pesto alla Genovese is a good template, establishing the garlic, herb (or leaf), nut, cheese, extra virgin olive oil formula which works so well. Once you have got the hang of this basic recipe, and found your preferred way of making it, be that pestle and mortar, immersion blender, food processor or magimix, you can improvise around this theme. Think of it as a set of pesto dance steps, that once mastered can be set to any ingredient tune.  I make parsley, walnut and parmesan pesto, sage, almond and pecorino pesto, mint,almond and salted ricotta pesto (to which I often add some finely chopped tomato making it rather like pesto alla Trapanese), rocket, pine nut and parmesan pesto, pea shoot, mint and almond pesto (to which I add peas and sometimes a blob of ricotta or thick greek yogurt).

As for qualities, an initial template is useful too, until you get the hang of things and pesto becomes a pretty relaxed affair for the eye and not the scales, that comfortable q.b. My original template of quantities for pesto alla Genovese came from the same person who so expertly pounded the ingredients by hand: 2 small cloves of garlic, a pinch of salt, 50 g basil leaves, 20 g pine nuts, 75 ml extra virgin olive oil, 30 g  pecorino cheese, 70 g parmesan cheese. These days I have a pretty good sense of these quantities and I keep them in mind whatever pesto I am making. 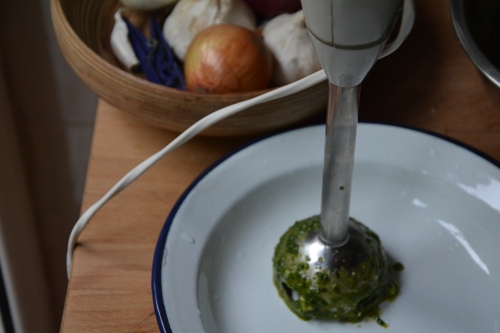 The pot of pesto pictured in this post was a make-do pot. The the last two cloves of garlic (note to self – buy more garlic), basil and two neglected stalks of mint that might otherwise have just been binned, the only nuts I had in the house (almonds), parmesan alone as I had no pecorino.  I feel reassured by a pot of pesto in the fridge so if I can, I try to make extra. It need to be covered with a thin layer of olive oil to stop discoloring. Pesto also freezes well if you are lucky enough to have a lot of something along with the wherewithal to stock pile.

So how to serve it. Pasta is our preferred way to eat all incarnations of pesto. I was taught to put a tablespoon per person of pesto in a warm bowl while the pasta is cooking then scoop 3 – 4 tablespoons of starchy pasta cooking water into the bowl to loosen the pesto into a creamy sauce. You then lift the pasta onto the pesto and toss, adding a little more water to loosen things further: the pasta should be silky and willing to curl around a fork, not clump together. I like pasta with pesto just so. I also like vegetables in the mix. With this basil, mint and almond I added some fine green beans and to the pan along with the pasta.

Pesto – despite what Vincenzo might tell you – is not just for pasta though. I used most of the rest of the jar as a dressing for warm boiled potatoes and green beans, and the last spoonful in a sandwich with some ricotta and mizuna. On other occasions I have used pesto at the bottom of a goats cheese tart thing, as a dressing for grated courgette salad, stirred into warm lentils. However you choose to use your potful, keep in mind that David Sanborn makes for a good and naff supper soundtrack and a bike ride (balancing and hills optional) is nice after. 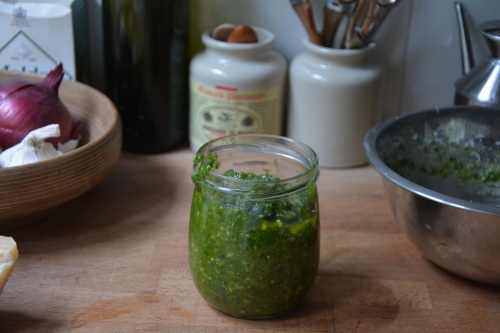 makes that jar-full in the picture.

Wash and dry the basil and mint leaves and put them in a deep bowl. Add 1 or 2 peeled cloves of garlic (you know best), a pinch of salt, and the peeled almonds. Pulse – cautiously to start –  with a stick blender until you have a rough paste. Add cheese bit by bit, with each addition adding some of the olive oil, stiring with spoon or pulsing with blender until you have a consistency and taste you like. This could of course be done with a pestle and mortar, or food processor.

Keep in a jar with layer of olive oil floating on the top to stop it discoloring. 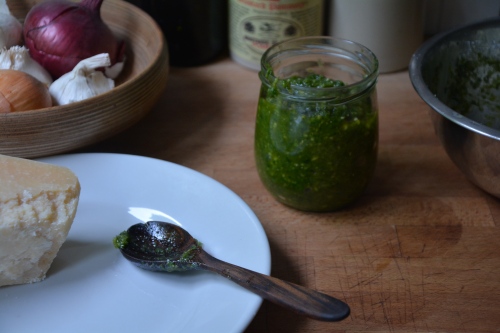 *I am now the happy owner of new pestle and mortar, a gift from my wonderful publisher Elizabeth on publication of the book. Did I mention I wrote a book? I will be pounding pesto with a pestle just as soon as I get back in my Roman kitchen. I am – despite this misleading post that has taken me a month to finish – still in England, which is lovely, but I miss Rome and my kitchen and (slightly blocked) kitchen sink and all that represents. Thank you again and again for all your support and cheering along, for buying the book and then sending me such generous messages, for cooking and then sending me pictures, really it fills me with joy. R

34 responses to “pound and pulse”