where it comes from

There was a particular moment as we drove back down the rough road from the stalls to the agriturismo for lunch. Against a backdrop of flint-grey mountain and low mist was a tree covered in buds, under it a fast running steam flanked by green. My camera was in its bag, which was twisted around the mechanism under the seat. Shit. Yanking was not the solution. It was too late anyway, the van had turned to cross a ramp over the steam and pit its Mercedes wheels against a slope covered with mountain coloured gravel.

There were plenty of particular moments last Sunday, some I caught with my camera, others I didn’t: mountains like giants either side of the narrow road, hundreds of sheep bolting around us, goats standing on sheep, the steam rising from a vat of almost ricotta. However it was the snapshot of a mountain, mist, tree, steam and green that stuck in my mind because it seemed to explain so much. It was like meeting a boyfriend’s parents for the first time. You understand the genetics: the gap in the teeth, the good metabolism, the nervous laugh. In that moment through a minivan window I understood something about the cheese I like to eat.

My dad would have called Sunday a beanday, which is his way of describing a day trip that involves a bloody good lunch. The story goes that when they were first married my dad arranged a surprise trip for my mum to an open day at a historic factory called Beanlands, which had nothing whatsoever to do with beans. On arriving at the factory my mum was less than impressed. However she was slowly drawn into what turned out to be a fascinating if eccentric day of local history. Then there was lunch. From that day on, a day trip arranged by dad for mum was called a beanday. Later, with three kids pre-seatbelt sliding across the backseat of the mustard Rover 3500, there was chanting as we set off on a beanday. As we turned into teenagers, chanting turned into moaning, which may or may not have ended by the time we sat down to lunch. By the time we were old enough to chant again we had left home, which meant my parents were – happily –  back to beansdays for two. 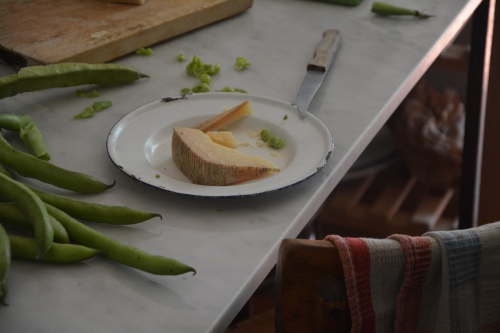 Actually we didn’t meet Gregorio. He was away, as he is every weekend, at a food and wine fair. Gregorio is a shepherd. During the week he works with his family, workers and pack of 40 white Pastori Maremmani sheepdogs tending to 1500 sheep, goats and cows high in the mountains. At the weekend he travels hard to promote and sell his cheese. At fairs he stands or sits (only occasionally dozing) behind a stall of his cheese: some wide and soft, others like big tear drops or stout ridged barrels the colour of sea-washed pebbles. He is a big man, as is his knife, the tip of which is pressed into the wooden board ready to cut slices of cheese with unnerving confidence. It was at fair of sorts in the old slaughterhouse in Testaccio I first encountered the man, his cheese and his knife. I tasted an aged pecorino, deep-yellow, crystalline with a sweet-sharp flavour that burrowed into my tongue. ‘Who is that man near the wine tasting’ I asked Francesca who brings her equally fine Abruzzese cheese to the farmers market each Sunday – a drive all the more impressive now we have done it. ‘Gregorio, mio zio‘ (my uncle)’ she replied. Francesca then went on to explain how they were an extended family of shepherds and cheese makers near Scanno on the edge of the Abruzzo national park. ‘You must visit‘ she said. ‘Then you will understand the cheese‘.

I guessed the girl who greeted us at the agriturismo was Francesca’s sister, so Gregorio’s niece, before she said so: the same brow and slant of a smile. She took us round to the room where her brother was about to finish the day’s cheese making. The white tiled room was small, clean, awash with whey and fuggy with milky steam. He had made Caciocavallo and Crescenza with cow’s milk. Pecorino made from sheep’s milk was sitting in perforated plastic baskets, alongside a cheese called Gregoriano. In metal vats whey from both milks was being re-cotto or re-cooked into ricotta. All the cheeses are made with their certified organic raw milk and rennet according to traditional methods. My camera lens steamed.

Have you ever been in a vast animal stall? I mean really in? In the middle of hundreds of sheep? They dash and swerve away from you, sheep displacement, and their breath and fleece brushes your arms as they do. The goats look nonplussed, pissed off even that you have displaced the sheep they were standing on. The air is filled with bleats that resonate up to the rafters. I was struck by the wholesomeness of it all. I imagined so many sheep, lambs, goats and kids would stink, but they didn’t. Of course they smelt, but nothing really untoward: hay, beast, wood,  wool, proper manure. It felt thick and earthy. Fleeces were full, faces opinionated and healthy. I imagined this was what was good husbandry looks like. Outside in another vast enclosure were hundreds more sheep against a backdrop of mountains and mist. Once the mist lifts and spring really reaches this height the sheep will be free to roam on rock, to graze on grass and the dozens of wild herbs that grow in this area of national park.

I have often heard Abruzzo described as Forte e Gentile, strong and gentle. Forte and gentile was what – I imagined – I saw through the minivan window in that moment driving back. Mountain, mist, tree, steam and pasture, that snapshot seemed to sum up a strong, mysterious land. A land that if tended properly (and tenaciously) is generous to people and animals. Animals who then provide good milk that is turned into good cheese.

Lunch could have begun no other way. There was freshly made sheep’s milk ricotta that was almost grassy and wobbled tenderly, a soft, aromatic pecorino called Gregoriano, a cheese made from three milks, a decisive, aged caciocavollo that almost tasted of wine. My favourite was two-year pecorino that was almost gold in colour, sharp, insistent and tasted like bolting sheep. Stunning, This was the one I would take home. After the cheese came pasta: fluted ribbons with lamb ragu, ravioli with fresh ricotta, and potato gnocchi with the sauce made from melted Gregoriano cheese loosened by pasta cooking water (the secret is so often the pasta cooking water.) After the pasta came excellent meat that deserved better cooking, but we ate it none the less. Some of us finished with a digestivo made from a root called Gentiana that made my hairs stand on end.  There were 10 or so people working in the large, functional dining room and kitchen, the family resemblance was striking, as was the good, wholesome hospitality.

As we drove away from the Agriturismo the mist was starting to lift allowing new perspectives. Mountains in the distance capped with the last snow or darkly-cloaked with forest, a road sign warning of bears, a town perched impossibly, a burst of wild poppies giving way to a steep verge. A herd of cows brought the minivan to an almost standstill then sauntered past. I grabbed for my camera. The strap was twisted under the seat. 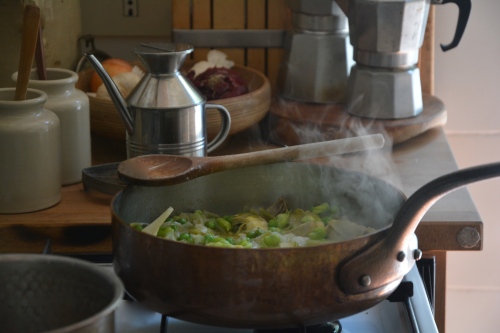 In Rome it is traditional to eat the first fresh broad beans (fave) with young pecorino Romano cheese, especially on the first of May. Having brought back a small barrel of Gregorio’s pecorino we had some of our first fave with that. It is a lovely companionable thing to do, podding and chiseling cheese together, and the combination of tender, waxy beans with the sharp cheese is a brilliant one.

Another celebration of spring, and something I seem to write about every year is Vignarola, A spring vegetables stew that can only be made for  a few weeks each year, when the last of the artichokes meet the first fresh peas, broad beans fave and spring onions at the market, It is one of my favorite things to eat, a true celebration of the changing seasons. There are of course as many versions of Vignarola as there are cooks. This is my version. I like vignarola with bread and some soft cheese, piled on garlic rubbed toast- I also like it stirred into pasta with grated pecorino cheese and just enough of the starchy pasta cooking water to bring it all together into slightly creamy whole. As I said, it is often all about the pasta cooking water. For me, this is a quintessential spring pasta dish.

Tagliatelle with Vignarola and pecorino  serves 4

Shell the fave and the peas. If the fave are large and have a tough outer coat remove it by plunging the fave in first hot water, then cold and then squeezing/pinching off the opaque coat. Thinly slice the spring onion.

Warm the olive oil in a heavy bottomed saute pan or enamelled cast iron pot. Saute the sliced onion over a medium heat until it is soft and translucent. Add the artichoke wedges and stems, stir well so each piece is glistening with oil. Add the wine and a pinch of salt, stir again and then cover the pan. Cook the onion and artichokes for 15 minutes, stirring and jigging the pan from time to time. Add the peas and fave, stir, re-cover the pan and cook for another few minutes. Taste, season with salt and taste again. The vignarola is ready when the vegetables are tender and the stew had come together into a soft, tumbling whole. Let the vignarola rest. If you have one, Tip the vignarola into a wide, deep frying or sauté pan as it will be easier to mix with the pasta.

Bring a large pan of well-salted water to a fast boil, salt generously, stir and add pasta. Grate some pecorino (I’d say about 60g). Once the pasta is cooked, use tongs or a spider sieve to lift it into the vignarola (You want it to carry a little starchy pasta cooking water). Scatter over the cheese and toss everything together gently but firmly,. You want the cheese to melt and mix with the pasta cooking water to from a sort of cream which brings everything together – watch the edges of the pasta, you will see it happening. You might need to add a little more pasta cooking water and toss again. Divide between warm bowls and top with more freshly grated pecorino.