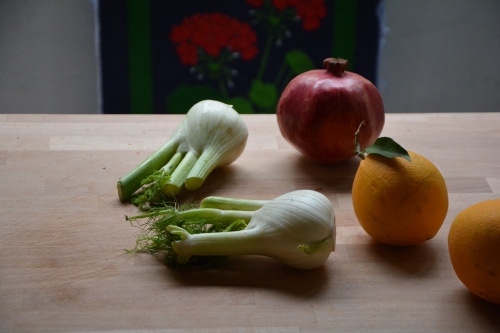 Rather like remembering not to rant or let fury at things beyond your control ruin your day, I’ve been trying to make the best of it. I even bought a nearly-cashmere cardigan, a pair of jade tights and rearranged the living room around a new striped rug that matches – quite incidentally – both cardigan and tights. I’ve tried to knit. I have crunched more leaves than my son. I have roasted chestnuts, smashed pumpkins and sliced porcini with stems the size of a babies leg for risotto, I even claimed ‘Autumn is my time of  year‘ in a proprietorial way while tossing my autumnal hair. But the truth is, I keep wanting to shout.

Not at the cold, I don’t mind that a jot, nor the drizzle – although the drizzle and anoraks are a pain –  but at the light, or lack of it. By 4 o clock as Luca wakes from his afternoon nap, the light is slipping away. We dress as hastily as is possible with a two-year old and then run, trying to catch the last hour, only to watch it being swallowed by dark. The park we used to run around until eight, is locked at five. The kiosk with it’s woven plastic chairs and memories of icy, sticky drinks and salty snacks, is empty. We adjust our jumpers and try to make the best of it, after all shops are starting to glitter and groan with christmas promise and cakes laced with dried figs and black pepper: this is no year for bah humbug, but the dark chases us home. 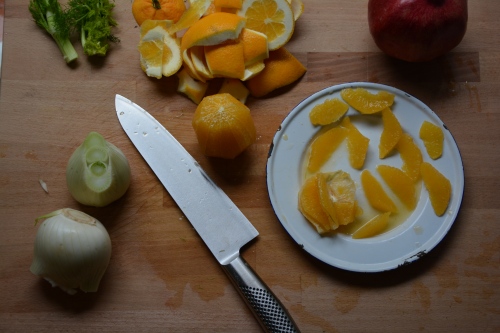 Back home by 6 with a long evening ahead – we seem to have adopted a southern European bedtime – I swing between attentive mother:  a book called ballata, board games and baking biscuits and absent mother: Disney babysitter, smarties and a very large glass of wine while I read blogs about craft activities I could be doing and dipping (Molly I adore you), mothers who have their children in bed by 7 and how to host the perfect cocktail party. Then I make supper.

Autumn nights call for stout sustenance, ideally with butter or fringed with fat, food that satisfies and reassures. Well mostly! They also call for bright and crisp from time to time, something to slow the slide onto the rug, to offer contrast and just a little resistance. Two things provide this, the first is puntarelle: a relative of chicory that twists into crisp, sweet but bitter curls, that you dress with anchovy and garlic dressing, the second is a salad of orange, fennel and autumn’s most precious fruit: pomegranate. 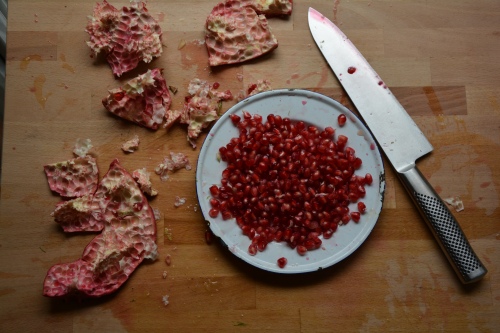 I like the mess: tiles and wood splattered with crimson. When we were little we would eat pomegranates that my Mum brought back from the Athenian Grocer on Moscow Road with a toothpick, impaling the little red jewels and pricking them into our mouths. I thought pomegranates were the most exotic fruit. I still do. When I go to live in Sicily – which I will – I will eat pomegranates every day I can.

Fennel: clean, crisp and with a bracing aniseed bite, slivers of orange, sweet and slightly acerbic pomegranate seeds, the right amount of salt and lots of best extra virgin olive oil makes a brilliant salad, one that manages to be both cool and warm, that provides brightness on dark days.  Especially good after a bowl of pasta e patate. Did I mention how much I like pasta e patate? Yes, good. 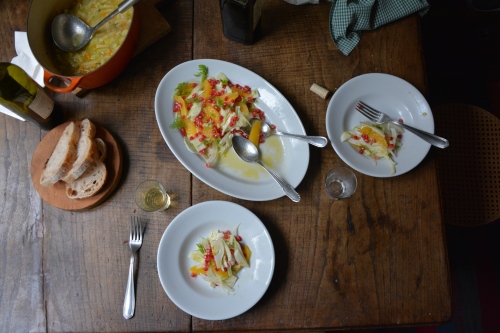 This is fact the fourth time I have written about this sort of salad. It is based on the classic Sicilian salad of orange, fennel, black olives and possibly onion. You could of course add olives to this version, ideally the inky-black, wrinkled, oven-baked ones that taste somewhere between dried plum, leather and liquorice. You really do need to be generous with salt – sprinkle from high above so the salt is evenly distributed – and even more generous with the olive oil.

Remove the tough outer layers from the fennel setting aside a few feathery fronds and slice a few millimetres from the base. Cut the bulb in two and then slice it as thinly as possible.

Cut the bottom from the orange so it sits flat on the work surface and then pare away the skin and pith carefully with a sharp knife. Working carefully, again with a sharp knife, cut the flesh away from the membrane on each side of each segment so you have soft, pith-less arc of orange. Work over a plate to catch juices

Cut the pomegranate in half and gently break the fruit open to expose the seeds and pull them away from the membrane and onto a plate.

Arrange the sliced fennel and orange segments on a large plate, scatter with pomegranate seeds and fennel fronds. Pour over any orange or pomegranate juice that collected on the plates. Sprinkle with salt and zigzag generously with olive oil. Allow to sit for 30 minutes before serving 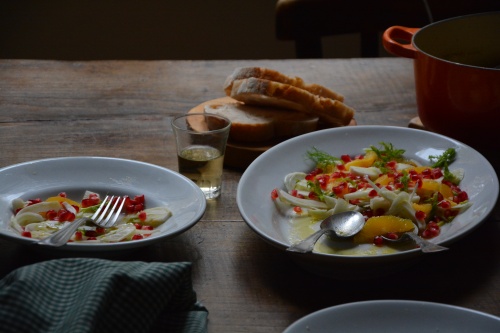 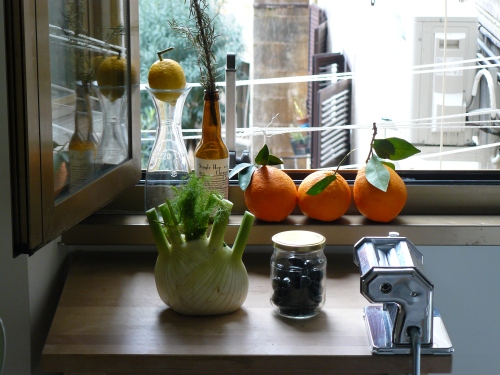 Yesterday it poured in Rome, rain and black smoke both, reminding us there was pontificating in progress. Then at about eight, the black smoke gave way to white and la fumata bianca poured from the copper chimney on the roof of the Sistine chapel, meaning the scarlet clad cardinals had chosen their new pope. It never stopped raining. Unaccustomed as I am to either watching Italian TV or considering catholic concerns I did both. Even I was moved by the sea of jubilant humanity in piazza San Pietro and the roaring cheer as a pensive Papa Francesco uttered buona sera.

There’s been more than enough pontificating about conclaves, cardinals and commanding! I’m not about to do any more of it here. Well apart from noting that although we’re diametrically opposed on countless matters, I’m glad to hear Papa Francesco’s views on single mothers, papel footwear and taking the bus, and that I just hope he’s given the space and opportunity to exercise his reputed political canniness and reforming drive. Dog knows they need it. 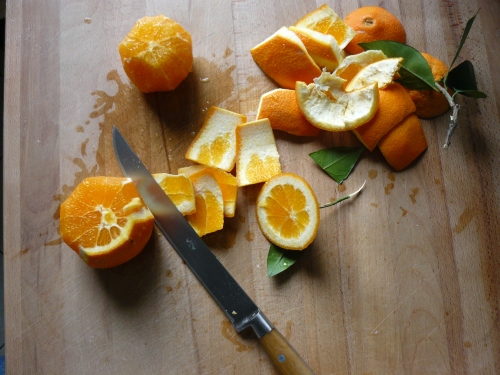 Oranges and fennel however, there hasn’t been nearly enough pontificating about either around here! So if you don’t mind I’ll do some today. If I was quicker and sharper I’d have bought blood oranges, their scarlet juice – reminiscent of the cardinals cassocks and conviction – bleeding and staining the wooden work surface. I am neither quick, sharp or inclined to scrub so orange oranges it is.

Lately I’ve been buying my greens and citrus from the local farmers market that takes place every weekends in the Ex-Mattatoio. This doesn’t mean I’ve been neglecting my market: the recently relocated but still thriving Testaccio mercato! We still go there faithfully. What can I say, semi-maternity-leave and an excuse to eat warm brioche whilst admiring artichokes and listening to market banter spliced with profanities: we go six days a week. Then on Sunday, the day Testaccio market rests, we walk that little bit further, curving our way along the river to The Farmers Market occupying one of the buildings in the vast sprawling complex that is the Ex-Mattatoio. 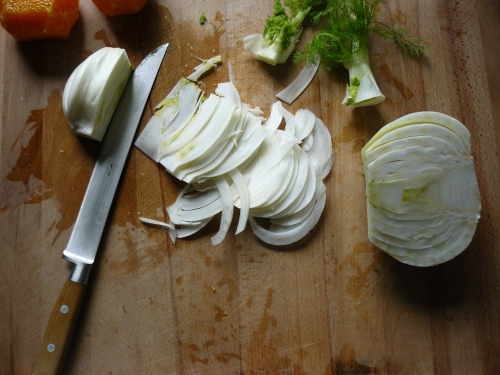 I’ve talked about the Ex -Mattaotio before. Once the principle slaughter-house for the whole of Rome, it’s an expansive patchwork of buildings, enclosures, thoroughfares and vast open spaces where animals once roamed. A place all the more extraordinary for being in the middle of a city like Rome. Closed for butchery business since 1975 it’s now part modern art gallery, organic supermarket, social club, concert venue, music school, shelter for the (poor) horses that drag Rome’s carriages, gypsy camp, stark wasteland and at the weekend, farmers market.

You’d be advised to arrive early, especially on Sundays. Naturally leavened bread, salumi, sheep’s milk cheese, olive oil, nuts, eggs, pasta, beans and grains, mushrooms, organic meat and the nicest, freshest produce you could hope to find all direct from bona-fide local producers is gathered under the high-pitched roof of the atmospheric pavilion. The air is always slightly damp, bosky and full of gastronomic promise. On Sunday I bought a piece of aged pecorino, a slice of guanciale, a kilo of cicoria selvatica: a dark green tangle of wild leaves, four artichokes, two deeply curved bulbs of fennel and a dozen matt-skinned, bright leaved oranges. 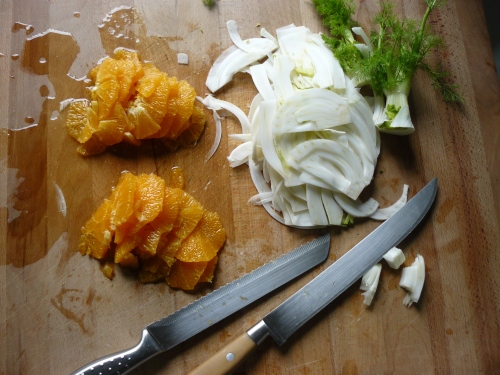 Which brings us to todays recipe, an assembly really, one of my favorites, a wisp of Sicily: oranges, fennel and black olives. Now they may seem an unlikely trio, but fennel, orange and olives go together so well, the Ahmad Jamel Trio of insalata. The crisp, clean and sweet tasting bulb with its faintly anise perfume and liquorice nip seems to enhance the sweet/sharp juiciness of the citrus, it’s flesh: firm and creamy contrasting with the soft languorous segments. The dark, baked olives: bitter, meaty and leathery compliment and contrast both orange and fennel.

The key is to pare away every trace of peel and pith from the oranges before cutting then into slender rounds and slicing the fennel lengthways as thin as thin can be into almost transparent arcs. Once cut, you arrange your orange rounds and paper-thin slices of fennel on a plate or platter. You can fan artistically, interweave cunningly or simply scatter hopefully. To finish you punctuate your orange and white assembly with black olives – the coal-black slightly wrinkled oven baked ones work well – sprinkle with coarse salt and then dress with plenty of good extra virgin olive oil. 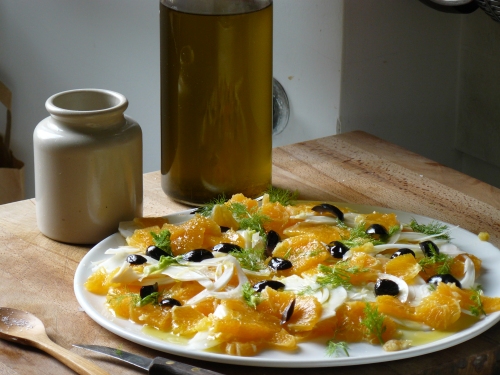 Look for sharply white, firm and bulbous sweet or Florentine fennel. Fennel with deep curves. Fat bottomed fennel. You may well come across flatter elongated bulbs, save them for braising or slow cooking. As for the oranges: sweet, really juicy naval are ideal. Pare away the peel carefully and set it aside for an appealing project.

The perfect antidote to downpours of rain or other bothersomeness. I also like this salad with grilled chicken or fish. 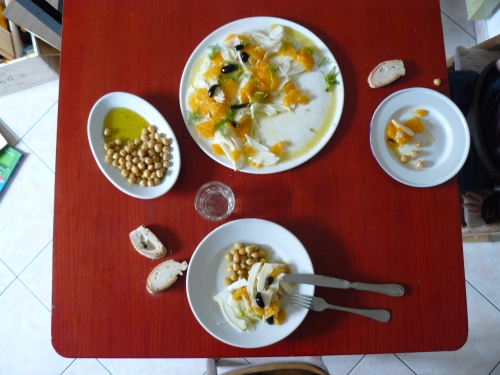 Using a sharp knife, slice away the very top and bottom from the oranges so they sit flat. Then following the contours of the fruit carefully pare away the peel and pith. Using a serrated knife, slice the oranges crosswise into 1/4 rounds.

Cut away the stems, remove any damaged or particularly tough layers and trim the base of the fennel bulb. Reserve the feathery fronds. Halve fennel bulb lengthwise and then cut each half – again lengthways – into paper-thin slices .

Arrange the arcs of fennel and rounds of orange on a large plate. Dot the salad with either whole or slivers of black olives. Using scissors snip over the feathery fronds. Sprinkle with coarse salt (black pepper too if you so wish) and then dress with plenty of extra virgin olive oil. 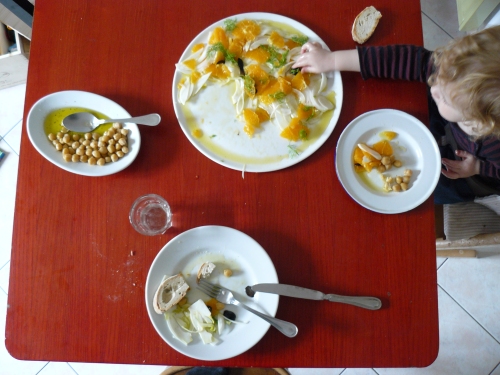