A ring and a pot

This can’t go on for much longer. I mean it’s fine once in a while, once a week even, but not every single morning. I really must take myself in hand and return to a more fibrous start, ideally a worthy cereal with superberries, fruit and yogurt with seeds, pebbles and oily fish, brown toast at the very least.

I’m thoroughly enjoying it while it lasts though, my two, sometimes three stumpy slices of cake, ciambella that is, and small bucket of milky coffee for breakfast. This cakey state of affairs has been going on for just over three weeks now, ever since my friend Ruth (who along with her Calabrian husband Ezio is one of my cooking/olive oil pressing/tomato preserving/ jam making/chicken and child rearing/wood chopping heroes) shared her recipe with me and I discovered the joys of ciambella or pot cake. Now you may be either disappointed or relieved to know I’m not about to share a recipe for a pot cake in the puff the magic dragon sense with you, the pot refers to a yogurt pot, a 125g pot of whole plain yogurt to be precise. 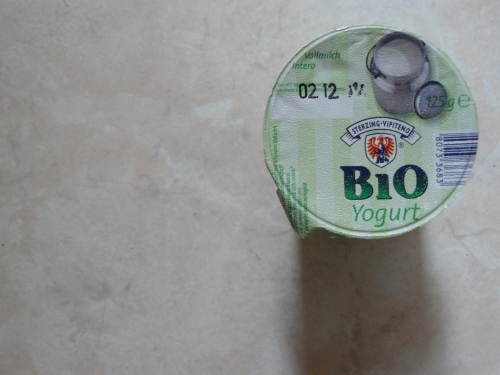 The pot of yogurt serves two purposes, The first, unsurprisingly, is the yogurt itself which is the first ingredient. The second is the empty pot which provides a nifty measure with which to scoop up the rest of the ingredients. Having tipped the yogurt into a large bowl, you add two pots of flour, one of ground almonds, another of sugar, 3/4 of a pot of extra virgin olive oil and two teaspoons of baking powder. To this you add three eggs and whatever embellishment takes your fancy – I will come to these a bit later. You give the mixture a very energetic stir or whizz with the immersion blender and then tip the thick batter into a well buttered and floured ring tin. You bake your ciambella at 180° for about 30 minutes. I estimate preparation time to be about 4 minutes and dirty dish and implement count 4 if you include the yogurt pot.

As much as I like minimal washing up and even though I’m the first to be extremely slap happy with measurements, I was rather skeptical when Ruth told me about this recipe!  I’ve always been suspicious of cups (pots) and sticks when it comes to baking, they just seem too vague and wildly imprecise, especially in my hands. Also I have such a nice reliable scale. This ciambella however has dented those fears, I’ve made it – to my slight embarrassment – 8 times in the last few weeks and it has turned out brilliantly each time. 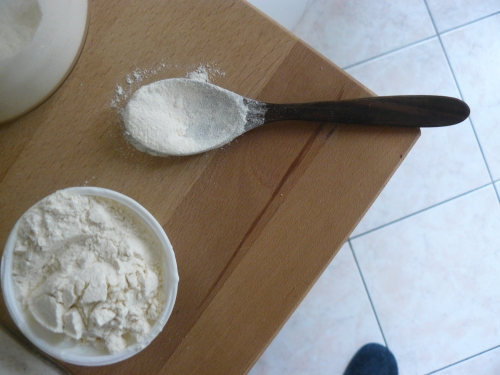 This ciambella is rather like a simple pound, Madeira or what some people call everyday cake. It’s pleasingly unfussy, firm yet light and thanks to the yogurt and almonds, really moist. The olive oil gives the ciambella a distinct brightness and a subtle fruity flavor, it also seems to help it keep better. Now I should add my ciambelle have been slightly different every time, even when I’ve stuck to the most basic recipe with no variations! But they’ve been unfailingly good and these differences, these ciambella idiosyncrasies, seem appropriate for something made this pleasingly hung-ho way.

Making this ciambella reminds me of when, at 8 years old, I learned how to make Corn flake crispies (melt arbitrary quantities of butter, golden syrup, sugar and cocoa powder in pan, mix with corn flakes, divide mixture between cake cases, chill, consume entire batch with best friend at bottom of garden and then feel very peculiar). They were one of the first things I was allowed to make all on my own and consequently – giddy with kitchen freedom and the promise of a large quantity of refined sugar – I made corn flake crispies at every available opportunity. The discovery of this recipe has had a similar effect, dizzy with the prospect of cake, minimal mess and virtually no washing up, I keep disappearing into the kitchen and making another one. A spare 4 minutes? Infant sleeping? Ad break during a film! Unexpected guests! Low blood sugar! A sniff of yogurt and I’m off.

.
So the variations. My favorite addition (the very first picture in this post) is lemon. You add both the zest and some juice of an unwaxed fruit to the basic olive oil and almond spiked recipe.  If I was feeling fancy could call this version of my pot cake ‘Olive oil, lemon and almond ring’ or if I was feeling Latin ‘Ciambella con olio d’oliva, mandorle e limone’. I’m feeling neither fancy nor Latin so lets stick with Lemon ciambella. Second prize goes to ciambella studded with the Piedmontese special, a heavenly couple, the one that fills a zillion pots of Nutella: hazelnut and dark chocolate. Bronze medal, surprisingly, goes to ciambella with grated apple, sultanas and nutmeg: a spicy, fruity little number that feels very seasonal indeed. Consolation prize must go to ciambella with banana, not my kind of thing at all, but beautifully moist it must be said and loved by everyone else.
.
For my most recent 4 minute baking session I made a ciambella with Demerara sugar, almonds that had been ground with their skins and a handful of chopped dark chocolate. I did wonder if it might be a little rich for someone whose always banging on about liking savory breakfasts. It wasn’t.
.

.
Hopefully the above has been so inspiring and the description so straightforward and clear you already know the recipe. If not (which means I have failed Ruth, the cake and as a blogger) here it is.
.
Ciambella

Tip the yogurt into a large bowl.

Using the yogurt pot as a scoop, add 2 pots of flour, 1 pot of ground almonds, 1 pot of brown sugar and 3/4  pot of olive oil and the baking powder to the bowl and stir.

Break three eggs into the bowl and stir the ingredients very energetically until you have a smooth batter.

Add the additions and stir again.

Pour the batter into the ring tin and bake in the middle of the oven  for 30 minutes or until a skewer inserted into the cake comes out clean.

Let the cake cool for 20 minutes or so before turning out onto a cake rack. 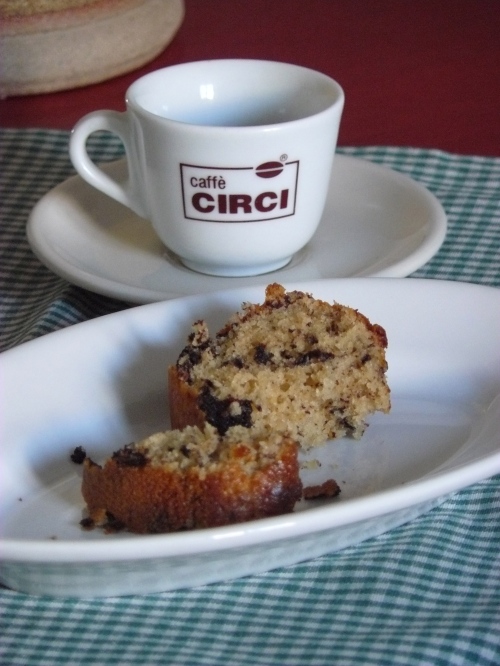