There is something forgotten and faded about sage, its musty nature reminiscent of somewhere that’s been shut up for too long, its dusty-green hue like something dulled by too much sunlight. Musty and dusty, lemon and camphour tinged, soft as moleskin yet rugged as my removal man, sage is one of my favourite herbs.

It had only been shuttered up for three months, but our new flat had a sage-like feel to it before I flung open the wooden shutters and windows on Saturday. I wonder if that was the reason I bought the plant? An unconscious herbal response to our new home! It’s the first of many pots that will eventually line our long, narrow balcony, providing me with kitchen herbs and Luca plenty of leaf-tugging and pot-pulling temptation.

Ignorning all advice, sage and otherwise, opting instead for the furious adrenaline fueled frenzy that spontaneously erupts when you leave everything to the last-minute, meant the move was unpleasant. I’m not sure I have ever felt quite so frazzled and frothing. Luca on the other hand thought all the boxes, heaving, open windows, bottles of toxic cleaner and flapping lift doors were hilarious.

Four days later and although far from organized and still besieged by homeless items, we are relieved and happy to be in our new flat. It feels pleasant and absolutely right. You might remember that Testaccio is shaped like a quarter or – rather more memorably – a large wedge of parmesan cheese. Our old flat was on one cut side. We are now on the other, the arc of the wedge being the river. Our balcony hangs over busy, plain-tree lined Via Galvani. Bearably busy though and punctuated  – much to Luca’s delight – by the intermittent clip-clop clatter of the horses pulling carriages back to their home in the Ex-Mattaotio.

I’ve had it in mind to batter and deep-fry sage leaves for months now, ever since eating rather more than my fair share at an aperitivo. The moorishly delicious leaves and my social ineptitude are to blame in equal measure for my disproportionate consumption. In possession of a sage plant, an ancient cooker positioned next to a blowy balcony door and flat to be warmed – I fried.

I’m sure we all have strong, possibly uncompromising views on batter. Where flowers and herbs are concerned I like mine light and delicate. Having whisked together 200 ml of warm water, 100 g of plain flour, 2 tbsp of olive oil and a hefty pinch of salt, I leave my pale batter to rest in the fridge for a couple of hours. Once it’s the spoon-clinging consistency of thick cream, I fold in a couple of eggs whites beaten so vigorously they stand to attention in peaks.

I drag the leaves through the batter, this side and that, before lowering them into very hot oil. It takes just seconds, a nudge and a flip, for the soft battered leaves to puff and seize into crisp golden cocoons. A slotted spoon is needed to lift the leaves from the oil onto first: a plate lined with brown paper or kitchen towel and then: another a clean plate over which I launch a shower of fine salt. The crisp, golden batter shatters and gives way to a warm, musky leaf. A few battered leaves, a cold beer (in a Nutella glass no less) on a sun-drenched balcony and all was well and good.

Talking of strong, uncompromising views, I have encountered many on the subject of the delightfully named saltimbocca – which literally translated means jump-in the-mouth – a most glorious combination of veal, prosciutto, sage, butter and wine. ‘Slice upon slice with the sage leaf pinned like a brooch‘ some say. ‘The veal dipped in flour‘ others cry. ‘Sage leaf under prosciutto’. ‘Sage leaf over prosciutto.‘ ‘A sprinkling of parmesan.’ Wine!’ ‘No no Marsala!’ ‘3 minutes.’ ‘7 minutes.’

Being, as I am, a saltimbocca novice, I was more than happy to let a friend who is staying take the lead. Alida learned from her father Adriano who in turn learned from his mother who in turn……. The veal must be best quality and thinly sliced. If it isn’t thin enough, a couple of rolls with a wooden pin should do the trick. There is no dusting in flour, no scattering of parmesan, simply a slice of veal, another of prosciutto, a single sage leaf, a flick of black pepper, a roll, a tuck and a strategic skewering with a toothpick

As Alida cooked the saltimbocca: first warming butter and oil until smoking, then leaving the pale-pink rolls untouched in the hot fat until they formed a deep golden crust, she explained the reason for rolls as opposed to a flat, open saltimbocca. Rolled she noted, the veal retains an exquisite pink tenderness at its heart. There is also a sliver of sage, a musky note, in every bite. ‘Of course you could try the open saltimbocca or a sprinkling of flour or parmesan‘ she said as she lifted the edge of a roll with a fork. Her eyes however, lifted in much the same way as the corner of the veal roll suggested – in inimitable Italian style – otherwise.

Once the saltimbocca are cooked – which takes just a matter of minutes – you move them into a warm plate while you deglaze the pan. Alida did this by pouring some white wine into the pan and then using a wooden spoon to scrape and dislodge all the dark, sticky juices and golden crust from the bottom. Back over a lively the flame she added a generous nub of butter and allowed it to melt and thicken the dark and richly flavoured sauce before pouring it over the saltmibocca.

For those of you with sage doubts, this is a dish that could well convince you otherwise. The domineering and bitter side of sage’s character is smothered, like gossip by silence, into something softer and more forgiving.

I rhapsodized over my meal – I had drunk rather a lot of wine – and finally understood others fervent devotion to this (near perfect) combination and timeless dish. Not so much a jump, more a languorous roll in the mouth. The combination of veal – golden and caramelized outside and tender within – fatty and salty prosciutto, darkly musty sage and a butter and wine sauce is a heady and purely pleasurable one. Unlike moving. 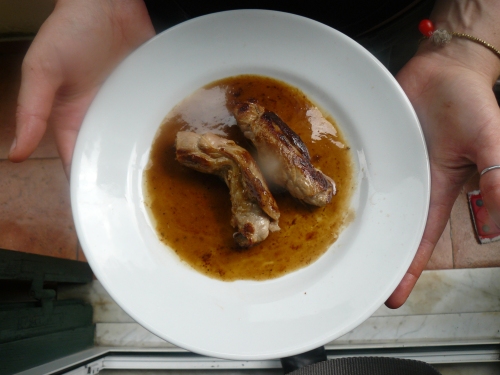 Recipe from my friend Alida and her father Adriano Borgna

I haven’t given precise quantities for oil, butter and wine because it feels counter intuitive for dish like this. Taste, practice and a heavy hand with the butter and wine.

for 2 as a main course or 4 as small second dish.

Over each slice of veal lay a slice of prosciutto and a sage leaf. Grind over a little black pepper and sprinkle over a little salt. Roll the veal into a neat log and then secure with a toothpick.

Warm a generous nub of butter and some olive oil in a good, heavy based pan. Once the fat is very hot and smoking add the rolls. Allow the rolls to sit untouched so a golden crust forms then turn them 90° and again allow a crust to form. Once the rolls are cooked and coloured evenly (this should take about 3 minutes) move them onto a warm plate.

Add some white wine to the pan and using and wooden spoon scrape and dislodge all the dark, sticky juices and crust from the base of the pan. Then back on the flame, add a generous nub of butter and allow it to melt and thicken the dark sauce which you then pour over your saltimbocca. 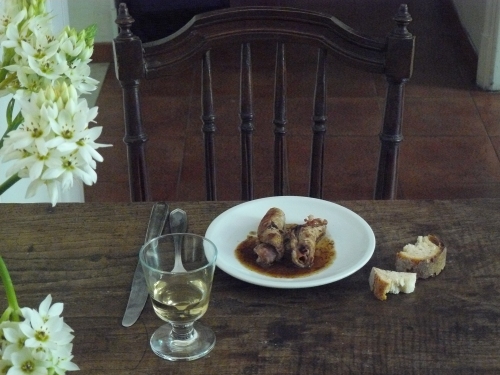